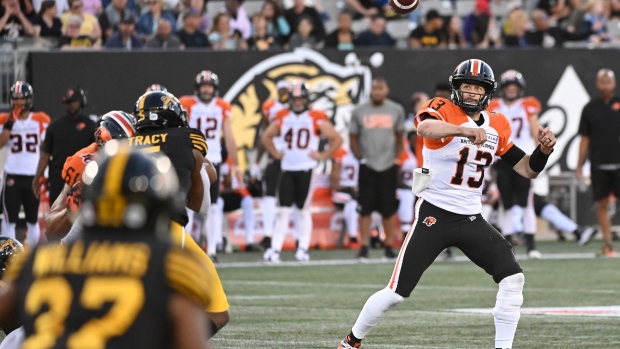 The B.C. veteran quarterback was a full participant at practice Monday. Reilly suffered an apparent ankle injury late in the Lions' 35-34 road loss to Hamilton on Saturday night.

Reilly signed a four-year, $2.9-million deal with B.C. as a free agent this off-season. He completed 21-of-28 passes for 306 yards with two TDs and two interceptions versus Hamilton but was also sacked four times.

B.C. has allowed a league-leading 29 sacks this year.

Collaros, 30, began the year as Saskatchewan's starter but left its season-opening loss in Hamilton early after being hit in the head by Tiger-Cats' linebacker Simoni Lawrence. Collaros went on the six-game injured list after the contest.

The CFL suspended Lawrence for two games for the hit.

Collaros missed four regular-season games and the West Division semifinal last season due to concussions. He signed a one-year deal with Saskatchewan as a free agent last February.

JUST FOR KICKS: Eighteen and counting.

That's how many kicks have been returned for touchdowns this season. The latest came Saturday night when Frankie Williams took a kickoff back 108 yards for the score in the Hamilton Tiger-Cats' 35-34 home victory over the B.C. Lions.

That boosted the CFL's single-season record for most kickoff return TDs to nine. The mark for most kick-return touchdowns — which also includes punts and missed field goals —in an 81-game season is 22, registered in 2004.

There were 15 return TDs in the CFL last season.

Williams appeared to make it 19 when he took Bralon Addison's lateral 81 yards for the TD on a punt return, but it was nullified by an illegal block penalty. Williams then reeled off a 57-yard punt return that set up Brandon Banks' game-winning 23-yard touchdown grab with just over a minute remaining.

Williams wasn't the only returner to find the end zone last week.

On Thursday night, Janarion Grant had two punt-return TDs in leading Winnipeg past Calgary 26-24. The following night, Montreal's Shakeir Ryan returned a punt 101 yards for a TD in a 17-10 home loss to Saskatchewan, a game that was called in the third quarter due to inclement weather.

Hamilton has recorded a league-best five return TDs, two more than B.C. and Winnipeg. Edmonton is the only CFL team to not have registered a kick-return score.

HARRIS ROLLING: An argument can be made for Andrew Harris being the CFL's top offensive threat.

The Winnipeg running back moved back atop the league's rushing race with 746 yards on 114 carries (6.54-yard average) with two TDs. Harris ran for 100 yards on 19 carries in a 26-24 win over Calgary on Thursday night that gave the Bombers (6-2) sole possession of first in the West Division.

Harris, a 32-year-old Winnipeg native, has run for more yards than the CFL's top pass catcher has in receiving yards. Hamilton's Brandon Banks leads the league in that category with 691 yards from 51 catches with five TDs.

The last time a CFL running back had more yards than the league's leading receiver was 2013 when Calgary's Jon Cornish — who was inducted into the Canadian Football Hall of Fame last weekend — ran for 1,813 yards while Edmonton's Fred Stamps finished atop the receiving ranks with 68 catches for 1,259 yards.

Harris is also attempting to become just the second Blue Bomber to lead the CFL in yards from scrimmage three straight years. According to CFL statistician Steve Daniel, Canadian Football Hall of Famer Charles Roberts did that from 2003 to 2007.

Harris has led the CFL in rushing the past two seasons, running for a career-best 1,390 yards in 2018. The five-foot-11, 202-pound Harris, who has played in all 18 regular-season games three of the past four seasons and has missed just three contests since 2015, is on pace for approximately 1,679 rushing yards this year.

But Harris can do more than just run with the ball. He also has 45 catches for 267 yards and three TDs, and in 2017 had 105 receptions for 857 yards and a touchdown for the Bombers.

Harris has recorded over 77 catches in each of the last three years and this season is on pace for 101 receptions.

LAWRENCE RETURNS: It was a solid return for Simoni Lawrence.

The veteran linebacker was back on the field with Hamilton on Saturday after serving a two-game suspension. Lawrence registered a team-high eight tackles and a sack in the Tiger-Cats' 35-34 home win over the B.C. Lions.

The CFL suspended Lawrence for hitting former Saskatchewan quarterback Zach Collaros in the head early in Hamilton's season-opening 23-17 home win June 13. Lawrence appealed the suspension, which was ultimately upheld by an arbitrator.

The Ottawa Redblacks kicker made both field goals he attempted in Friday night's 16-12 loss to the Edmonton Eskimos. Ward is 21-of-21 this year and has extended his pro football record streak to 69 straight successful boots.

The second-year Redblack has made 72-of-73 career attempts. His lone miss came in Ottawa's 2018 season opener versus Saskatchewan.