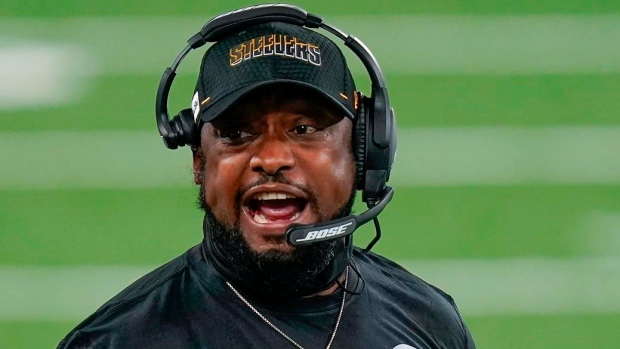 A day after being positioned as a surprise candidate for the vacant USC job, Pittsburgh Steelers head coach Mike Tomlin called the speculation a "joke" and firmly distanced himself from it.

Tomlin's name was one of a handful candidates mentioned by former Trojans quarterback Carson Palmer on Monday's edition of The Dan Patrick Show.

In no uncertain terms, an irritated Tomlin denied any interest.

Mike Tomlin said he didn't have the time to shoot down college coaching rumors, but then he found some with this absolute evisceration of the speculation.

"That will be the last time I address it. Not only today, but moving forward. Never say never, but never. OK?" pic.twitter.com/fqMd6gKD9N

"I don't have time for that speculation," Tomlin said on Tuesday, addressing the media during the team's bye week. "That's a joke to me. I got one of the best jobs in all of professional sport. Why would I have any interest in coaching college football? That will be the last time I address it. Not only today, but moving forward. Never say never, but never. Okay? Anybody else got any questions about college jobs? There's not a booster with a big enough blank cheque."

The Trojans have been without a permanent head coach since the firing of Clay Helton in September.

Tomlin, 49, is in his 15th season with the Steelers. The native of Hampton, VA has led the team to seven AFC North titles and Super Bowl XLIII in 2009.