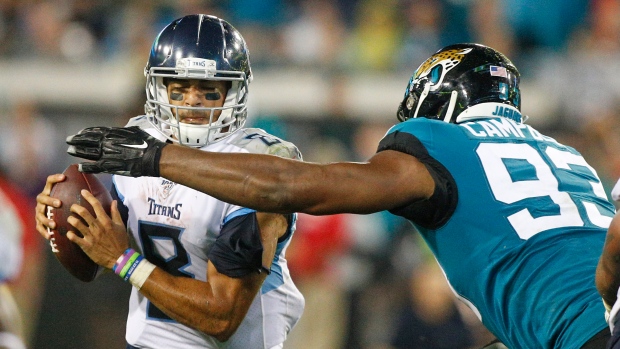 Following the Tennessee Titans' 20-7 loss to the Jacksonville Jaguars on Thursday, there has been some speculation that perhaps the Titans might bench quarterback Marcus Mariota. Titans head coach Mike Vrabel, however, says Mariota will remain the team's starter for the time being.

#Titans' Vrabel: Not looking at a QB change right now, but something that's always considered ... Does mention there are some plays the team would like to have back in all areas, including QB.

Mariota, who is in his fifth year starting at quarterback for the Titans, went 23-for-40 with 304 yards passing with no touchdowns against the Jaguars. He was also sacked nine times by Jacksonville’s defence.

A standout player in college at Oregon — where he won the 2014 Heisman Trophy — Mariota was drafted second overall in 2015 by the Titans. In his four previous seasons with Tennessee, Mariota has led the team to the playoffs just once.

He has thrown for 12,710 yards and 73 touchdowns in his career against 42 interceptions.