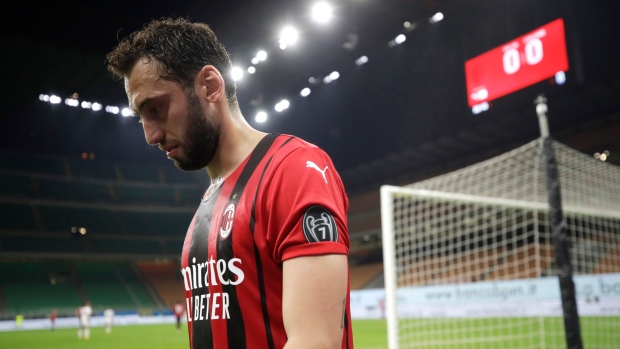 MILAN (AP) — AC Milan, Napoli and Juventus will have to wait until the final day of the season to see which two teams qualify for next season’s Champions League.

Milan, which is bidding to return to Europe’s elite after an eight-year absence, could only draw 0-0 against Cagliari on Sunday to leave it level on points with Napoli after Gennaro Gattuso’s side won 2-0 at Fiorentina.

The two teams are a point above fifth-place Juventus, which beat Serie A champion Inter Milan 3-2 on Saturday.

Milan next plays at Atalanta, which has already qualified for the Champions League. Napoli hosts Hellas Verona and Juventus visits Bologna. The top four qualify for Europe's premier club competition.

Milan knew a win would guarantee it a return to the Champions League for the first time since the 2013-14 season.

Cagliari would have needed a point to secure safety but earlier results meant it was already guaranteed another season in Serie A.

Milan was without star forward Zlatan Ibrahimović, who has also been ruled out of the upcoming European Championship because of a knee injury.

It was reduced to long-range shots in the first half. The Rossoneri went closer in the second period but were denied on several occasions by Cagliari goalkeeper Alessio Cragno.

Napoli knew that a win would ensure it heads into the final weekend of the season in the top four.

Lorenzo Insigne’s free kick came off the crossbar in the first half but the Napoli captain broke the deadlock 11 minutes after the break.

Napoli was awarded a penalty when Nikola Milenković tugged Amir Rrahmani’s shirt on a corner. Insigne’s spot kick was saved by Pietro Terracciano but the Italy international tucked away the rebound.

Insigne hit the woodwork again before Napoli doubled its lead 11 minutes later after Piotr Zieliński’s shot was deflected in by Fiorentina defender Lorenzo Venuti for an own-goal.

Benevento’s survival chances are out of its hands after the team could only draw 1-1 against 10-man Crotone.

If Torino avoids defeat against Lazio in Tuesday’s rescheduled game, then Benevento will be relegated. If not, Benevento has to beat Torino in their final match.

Crotone played for more than an hour with 10 men after defender Vladimir Golemić was sent off for a cynical challenge on Gianluca Lapadula. But it still managed to snatch an equalizer in stoppage time through Simy.

Already-relegated Parma lost 3-1 at home to Sassuolo, and Sampdoria won 1-0 at Udinese.