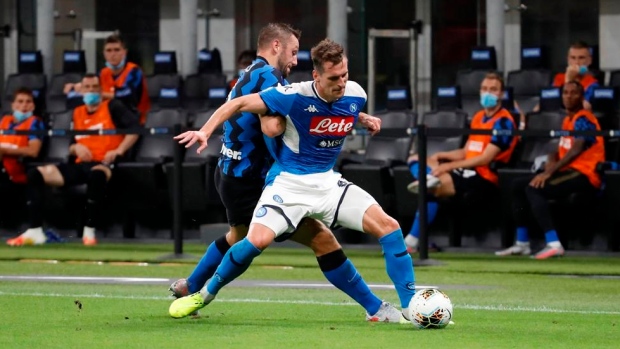 PARIS (AP) — Top-tier Marseille advanced to the last 32 of the French Cup by overcoming an early shock against amateur side Le Cannet Rocheville on Sunday with Poland striker Arkadiusz Milik scoring a hat trick in a 4-1 win.

Mike Core beat the offside trap and slipped the ball through the legs of Marseille goalkeeper Steve Mandanda to give the fifth-division team the lead in the 16th minute.

Milik equalized in the 41st by converting a penalty after defender Iheb Lahouel received a second yellow card for a poor tackle on American winger Konrad de la Fuente.

Second in the French league, Marseille dominated the second half against 10-man Le Cannet Rocheville. Milik scored after a low cross from Matteo Guendouzi in the 58th. Guendouzi then set up Brazilian forward Luis Henrique, who slotted into the far corner in the 77th. Milik sealed the win in the 90th with a tap-in.

PSG's opponents were punished for their lack of discipline in the first half. Kylian Mbappe opened the scoring with a penalty in the 16th after Ibrahima Diedhiou had tripped him. Mauro Icardi doubled the lead with another penalty in the 31st after Gary Marigard had pulled back Mbappe.

Mauricio Pochettino left Marquinhos and Lionel Messi out of the squad while Sergio Ramos played his second game this season for PSG, the most successful club in the competition with 14 titles.

Colin Dagba replaced Ramos at halftime and cut the ball back for Mbappe who made it 3-0 from close range in the 51st.

"They’re much stronger than us. And they really play much faster,” Feignies Aulnoye goalkeeper Yann Le Meur told Eurosport television. “To play in a last-64 game like that, what’s more against PSG, that’s a moment we will never forget in our lives.”

Fifth-division team Linas-Montlhery caused the upset of the day by beating top-tier Angers 2-0.

Pascal Leno headed home a corner in the ninth minute before capitalizing on a counterattack to add a second goal in the 24th.

“That was hard,” Linas-Montlhery forward Issa Cisse told Eurosport television. “We suffered, we ran a lot. It came from the right, from the left, down the middle, but we didn’t give in.”

Angers coach Gerald Baticle perhaps underestimated Linas-Montlhery as he made nine changes to the team that started in the French league last weekend.

“They deserved more than us to qualify,” Angers defender Romain Thomas told Eurosport television. “They were more opportunistic than us. We got what we deserved.”

Brest narrowly avoided an upset by outlasting fifth-division team Dinan-Lehon 13-12 in a penalty shootout after 0-0 in regulation time. Jean-Kevin Duverne converted the final spot kick after Dinan-Lehon defender Florent Herve sent his penalty over the bar. Dinan-Lehon was down to 10 men in the 32nd when Samba Toure was sent off.

Making his debut as Saint-Etienne coach, Pascal Dupraz watched his team’s 1-0 win over fourth-division side Lyon La Duchere. Saint-Etienne winger Arnaud Nordin fired the ball into the bottom corner in the 32nd. Dupraz replaced Claude Puel and is tasked with pulling Saint-Etienne out of the relegation zone. Saint-Etienne supporters were banned from attending the game as the Rhone prefect feared potential violence because of the regional rivalry between Lyon and Saint-Etienne.

Nice beat third-division club Cholet 1-0 with a header from Andy Delort in the 63rd.

Reims needed a late goal from teenager Martin Adeline in the 89th to knock out Reims Sainte-Anne 1-0 in a Champagne derby.