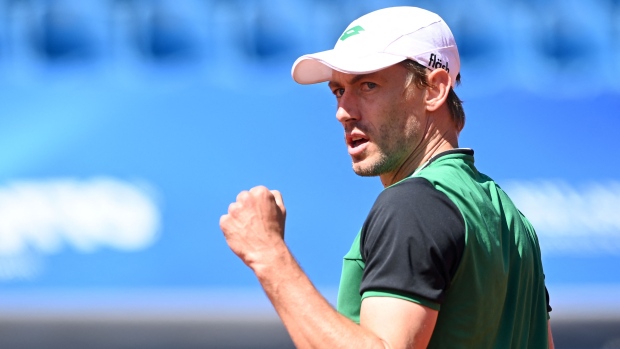 MUNICH — John Millman won an all-Australian match against Alexei Popyrin 7-6 (3), 3-6, 7-5 to move into the second round of the Munich Open on Monday.

The eighth-seeded Millman saved 13 of 15 break points as he needed almost three hours to overcome Popyrin.

Millman is coming off three consecutive second-round losses since the European clay season began, and will face Guido Pella in the second round. Pella was leading 6-0, 2-0 in his first-round match with Egor Gerasimov when the Belarusian retired.

Federico Coria will take on third-seeded Australian Open semifinalist Aslan Karatsev after beating Cedrik-Marcel Stebe 6-3, 3-6, 6-2 in a match which saw seven consecutive breaks of serve in the first set.

Qualifier Ilya Ivashka upset Emil Ruusuvuori 6-1, 6-2 to move to an 8-2 record on clay this season, including qualifying matches.