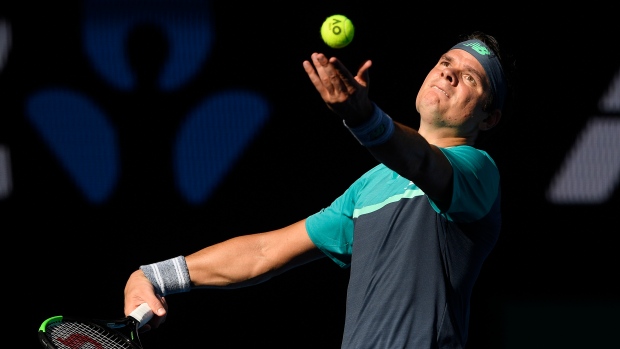 When Milos Raonic was invited to take part in the Adria Tour, the 29-year-old gave it serious thought.

"I have never played in front of most of my cousins," said Raonic, who was born in Montenegro, which was initially slated to host a leg of the charity exhibition. "I've never played in front of my grandmother and aunts and uncles so I did consider it. But if the US Open was going to happen I didn't foresee myself travelling to Europe and back. I felt like that was an unnecessary risk."

And this was before Rao​nic saw the images of players taking part in a soccer game and basketball game to promote the event and before he saw the packed stands in Serbia and Croatia.

"My understanding was most of those events were probably going to be with no public and probably by the time we got around to Montenegro there would be the chance of there being public attendance," he said. "Personally, I wouldn't have felt comfortable especially with the promotional events that were being done."

While Novak Djokovic insisted the Balkans-based event, which he spearheaded, followed the guidelines issued by public health authorities, the World No. 1 faced questions about the lack of physical distancing even before a series of positive tests led the Adria Tour to cancel its remaining events. Grigor Dimitrov, Borna Coric, Viktor Troicki and Djokovic are among those who announced they now have COVID-19 infections.

Djokovic, who apologized for misjudging the situation, has faced a chorus of criticism leading allies to come to his defence, but that has only served to fan the flames of controversy. Raonic, for example, was "bothered" by a report that Djokovic's parents are blaming Dimitrov for spreading the virus despite there being no evidence that the Bulgarian arrived at the event sick.

"It's a completely unfair comment," Raonic said. "There were other things that may have caused it, maybe Novak going to a basketball game where he met with [Serbian NBA star Nikola] Jokic who later on did test positive. So there are a lot different things that are, let's say, filled with gossip at this point. Instead, the focus should be on, 'OK, that didn't work, what can we do better so we can have successful tennis events coming back to the world?'"

The bruises to Djokovic's reputation feel like they may take a while to heal. Even though he's president of the ATP Player Council and one of the all-time greats, Djokovic's ability to lead tennis during this crucial period appears to be compromised.

"I know he was one of those against the idea of coming to the US Open and, at an early point, said under those conditions he doesn't see how you can be holding a grand slam," Raonic pointed out. "I think maybe after this series of events that specific argument for him doesn't carry as much weight. On this specific topic, especially leading up to the US Open, there won't be as much gravitas behind his comments. For other things, I think he has led players in a positive way, but in terms of this specific instance that we're facing right now it will take him a little bit to get that trust back."

Novak Djokovic has tested positive for COVID-19 after taking part in the Adria Tour....@jon_wertheim & @markhmasters on how Djokovic has done "significant" damage to his reputation and his role as ATP Player Council president is in question: https://t.co/w8RH7W02vn pic.twitter.com/5C7heZmsDT

So, it will be up to Raonic and others to try and shape how the sport returns. The United States Tennis Association recently unveiled its plan to hold the US Open and Raonic welcomed the news even though there will be no fans and tight regulations. He does, however, have one major concern.

The USTA will allow players to bring multiple support staff to New York City, but will limit who is allowed on site at the Billie Jean King National Tennis Center. Raonic believes that could put players in a tough spot. Players will want their coach on hand to help calm any nerves at a tension-filled time, but with such a long layoff since the last competition and with the best-of-five format at majors, having a personal physiotherapist nearby at all times is also important.

"You're presenting the player with a choice of what's more important to you: tennis or your health?"

The tournament and tour will provide medical services to players on site, but Raonic stresses there's a comfort level with your personal support staff.

"My physio knows what I've been carrying the last five, six months," said Raonic, who has been dogged with injury issues in recent years. "He knows what kind of remedies and treatments are successful in dealing with those issues and he knows my body. During a grand slam I think my schedule on a treatment table with my physio is between two hours and two and half hours total throughout the day, can the USTA and ATP staff satisfy those hours?"

Raonic suggests the USTA allows players to bring their "essential" staff on site. With no fans, he said physical distancing will be possible on the spacious grounds in Queen's.

While the details are still a work in progress, what we do know for sure is that there will be no fans. Australian Alexei Popyrin, who is ranked No. 103, told TSN last week he's expecting more upsets, because higher-ranked players aren't used to playing in front of empty stands. But Raonic doesn't think that will be a big adjustment.

"With the warm-up events before we'll have no fans and so players will get used to that," he said. "At the end of the day, we play a lot of practice sets with nobody watching. The top guys are all professionals and are all going to put in the right amount of time and know how to go about their training to be as prepared as possible leading into the US Open."

Talking to 🇦🇺 @AlexeiPopyrin99 on ...

* Letting emotions out at @UTShowdown
* Why "steal serve" is his favourite card to play
* How in-match interviews actually help him
* Concerns about travelling to @usopen
* With no fans, expecting more upsets in NYChttps://t.co/67CLi2OcgQ

With the ATP Tour planning to resume on Aug. 14 with the Citi Open in Washington, D.C., Raonic said the players who best utilize this unprecedented break in the schedule will have the best chance to post surprising results. Raonic, who has been heathy so far this season, has already gone through a couple training blocks with one more to come.

"It allowed me to focus on different things," he said. "The first block we focused a lot on fitness. The second block was about getting back into tennis, but still with the main focus being on fitness. Now that we have an idea of when we're going to be back, it's going to be a major focus on the tennis and implementing a few specific things, things I want to do differently on court."

By studying video, Raonic has identified tactics opponents have used to unsettle him in the past. Known for his big serve, Raonic has spent a good chunk of time on his return.

"I'm a big guy," the 6-foot-5 Canadian said. "I have a big wingspan, but I felt like a lot of times I was going too much laterally instead of going on an angle forward to cut off the serves, especially the wide ones on the deuce side to the forehand and maybe on a kick serve on the ad side to the backhand or if I'm playing a lefty that slider wide. So, I've worked to shorten off that angle and sort of give myself a chance to hit it more aggressively within one step and also not be as out of position for the next ball."

While Raonic has made the quarterfinals or better five times at the Australian Open, including earlier this season, he has never cracked the final eight at the US Open, which is also played on hard courts. Due to injury, Raonic has been forced to sit out two of the last three trips to Flushing Meadows, which is at the end of the summer. Perhaps in this most unusual of years with a rejigged schedule he can finally breakthrough in the Big Apple.

Raonic, currently No. 30 in the rankings, made it clear he is targeting a return to loftier heights.

"My intention was to be as ready as possible. You'll have three Masters series events, two grand slams plus a 500-level event within eight weeks so, you know, there's a lot that can be done if you come in with the right mindset, right physical shape and I'm trying to create as much of an opportunity as possible."​