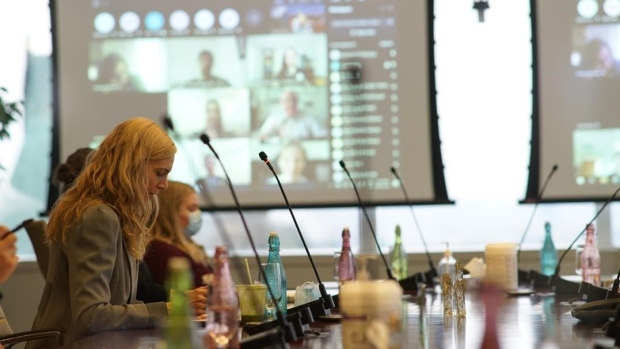 In the five months since Pascale St-Onge was appointed Canada's Sport Minister, there have been allegations of either maltreatment, sexual abuse or misuse of funds levelled against at least eight national sport organizations.

St-Onge is certain there'll be more. Sport, she said, is in "crisis."

Two days after vowing to accelerate the independent mechanism for reporting maltreatment in sport, St-Onge and Parliamentary Secretary, Adam van Koeverden held a roundtable discussion of Canadian sport leaders and athlete representatives, and in an exclusive interview with The Canadian Press, she said there was a sense of urgency among everyone in attendance.

"We do believe that we are going to hear about more cases," she said.

"It just reinforces my mindset that we need to rethink about the whole system as athlete-centred, and athlete-oriented … I think that what's coming out right now in this crisis is that the athletes haven't felt heard, or sufficiently supported."

On Monday, 70 current and former gymnasts wrote an open letter to Sport Canada calling for an independent investigation into the toxic culture of their sport. The number of signatories has since grown to more than 150.

In a feeling of floodgates opening, the gymnasts were the latest in a growing chorus of complaints from athletes in bobsled and skeleton to rowing, rugby, synchronized swimming, women's soccer, among others. They're calling for a cleanup of the toxic culture in their sport, saying they've felt scared to speak out until now.

St-Onge had previously called for a financial audit into Bobsleigh Canada Skeleton after a similar open letter signed by more than 90 athletes called for the resignation of their national sport organization's acting CEO and high performance director.

The Sports Dispute Resolution Centre of Canada (SDRCC) won the contract last July to handle reports of maltreatment in sport, such as the complaints from gymnastics, bobsled and skeleton. St-Onge said it will be operational by late spring, and it will be mandatory for all federally-funded national sport organizations (NSOs) to work with the SDRCC.

Prior to last July, NSOs were required to have a safe sport officer, but there was grey area in some sports around whether they were truly a third party.

"I understand why athletes feel uncomfortable with that, because it can hardly be completely independent, if there's any kind of connection to the NSO," said Water Polo Canada's CEO Martin Goulet, who participated in Thursday's roundtable.

Goulet hopes the new safe sport mechanism will operate much like Canada's anti-doping program, through the Canadian Centre for Ethics in Sport (CCES).

"The model that we have for anti- doping is a great model, because it's completely independent, it's completely separate from us," Goulet said. "As a CEO I cannot influence any of that, there's nothing I can do. Thank God it’s like that."

The COC Athletes Commission urged St-Onge to accelerate the implementation of the SDRCC's independent mechanism.

St-Onge applauded the athletes for their courage in speaking out, saying "it is because of their strength and courage that we're acting with an even greater sense of urgency."

She also commended the work done by her predecessors Steven Guilbeault and Kirsty Duncan. Duncan launched the Canadian Sports Help Line, a toll-free phone line for referrals, in 2019.

St-Onge said as of Friday, national-level athletes will have access to increased services offered by the SDRCC, and victims can access these services via the sport help line (1-888-83SPORT or www.abuse-free-sport.ca).

"But we are all aware that work needs to be done on prevention, education, on changing the culture of sport in Canada, looking at the governance of the organizations, so there is going to be no stone unturned," St-Onge said. "It's my priority. We're going to make sure that we change that culture of sport."

The crisis in culture is clear in sports such as gymnastics, which is made up mostly of athletes who are minors. And sports at the provincial and club level don't fall under the national sport organization umbrella.

"I know how much sport can contribute to someone’s life on different levels, whether it's mental health, physical health, building strong character and discipline, so it is very heartbreaking to see that sport is actually destroying people's lives," said St-Onge, a competitive swimmer for 11 years and university volleyball player. "It's certainly not what we want from sport.

"For sport to be sustainable, we need parents to feel that their children are well taken care of when they send them into clubs or the higher level. They need to know that there is a system in place to protect them and make sure that they can grow into beautiful adults. Right now, this crisis is shaking that confidence and that trust.

"Everybody who was at the roundtable today wants to make sure that kids and parents feel safe in the sport system. So, we need to do more."

This report by The Canadian Press was first published March 31, 2022.