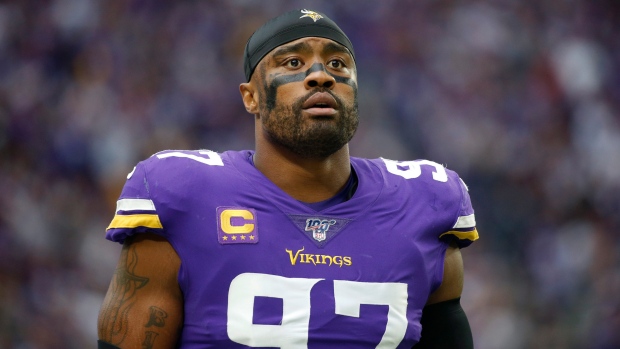 The Minnesota Vikings announced on Wednesday afternoon that defensive end Everson Griffen ended an hours-long standoff in his home without incident and was now "getting the care he needs."

Statement from the #Vikings pic.twitter.com/nHGXOZPFH9

Earlier in the day, Griffen refused to leave his home after telling police he fired a weapon inside the residence early Wednesday morning, according to the Minnetrista Public Safety Department.

Griffen called 911 around 3 a.m. Wednesday saying that there was an intruder in the home and that he needed police assistance. He told the dispatcher that he had fired his weapon but that no one was injured.

Police said that they could not find an intruder at Griffen's residence.

Vikings coach Mike Zimmer told reporters before the release from the police that he was not sure of Griffen's safety.

In his first stint with the Vikings, Griffen took a monthlong hiatus during the 2018 season to focus on his health and well-being after the team ordered him to undergo a mental health evaluation and two incidents involving police authorities led to him being hospitalized. He said in April 2019 that he had had a "rough year" relating to his mental health.

- With files from ESPN

Information from ESPN's Courtney Cronin was used in this report.