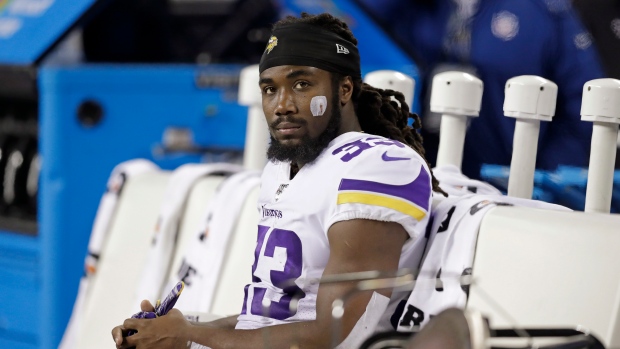 Minnesota Vikings running back Dalvin Cook was forced to leave Monday Night's loss to the Seattle Seahawks in the third quarter with a right shoulder injury after losing a fumble.

After the game, Cook told reporters he could have come back in the game if necessary and expects to play in Week 14 against the Detroit Lions.

"It's a weird injury that I've got," he said. "It's kind of like when I land in an awkward spot, it hurts. So I kind of try to land to where it doesn't hurt. So it was awkward the way I was landing. It's a physical sport. At the end of the year, there's some bumps and bruises, but I'll be all right," Cook told reporters.

"We just have to know what we have ahead of us. We have four crucial games ahead of us. I've got to be ready to go for those games. I was all-in for them holding me out and I'm looking forward to what we've got ahead of us."

Cook appeared to be favouring his shoulder at times during Monday's contest and was forced from the game on his first carry in the second half. After he left the game and went to the locker room, Cook spent the rest of the game on the sidelines without his helmet.

Teammate Stefon Diggs also appeared to suffer a leg injury on the same play, but re-entered the game shortly after. He, too, said he thinks he'll be fine.

"I got rolled up on my leg," Diggs told reporters. "Little scared afterwards but I'm okay. I'm fine."

Following their loss to Seattle on Monday, the Vikings sit second in the NFC North Division at 8-4, half a game behind the Green Bay Packers who sit at 9-3.