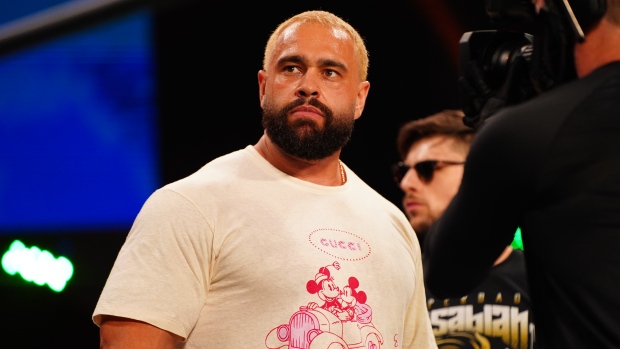 Miro defends his TNT Championship for the first time when he takes on Top Flight's Dante Martin on a special Friday night edition of AEW Dynamite. You can catch AEW Dynamite at 10pm et/7pm pt on TSN2, the TSN app, streaming on TSN Direct and on TSN.ca.

TNT Championship match: "The Best Man" Miro (c) vs. Dante Martin - Miro remains undefeated in AEW and is fresh off a convincing victory over Darby Allin to capture the TNT title only two weeks ago, but he's learning very quickly that your plate fills up fast when you're carrying gold. The burly Bulgarian is set to take on "The Murderhawk Monster" Lance Archer at the Double or Nothing pay-per-view on Sunday night, but before he can do that, he must deal with the challenge of Dante Martin. One half of Top Flight, Martin has been competing in singles action of late with his brother, Darius Martin, on the shelf with a torn ACL. Just 21, Martin has pulled off an impressive string of victories since temporarily transitioning into the singles division. Following a loss to Max Caster on the inaugural edition of AEW Dark: Elevation in early March, Martin has won seven singles matches in a row heading into Friday night. While Miro represents the biggest challenge of his young career, thus far, Martin comes into the match with sky-high confidence. Will Miro steamroll Martin like he has everybody else in AEW or will he be so focused on Archer that Martin can pull off the massive upset?

The Dark Order (Evil Uno and Stu Grayson) vs. "All Ego" Ethan Page and Scorpio Sky - Before Ethan Page and Scorpio Sky can take on Sting and Darby Allin on Sunday night, they must meet the challenge of Dark Order duo Uno and Grayson. Since forming an alliance, Hamilton, Ont.'s Page and Sky are 7-0 in tag-team competition and hold a win over Uno and Grayson's stablemates, Alex Reynolds and Alan "5" Angels. The pair will look to head into Sunday's grudge match on still on that winning run. But Uno and Grayson, a team for years, are the most formidable opponents Page and Sky have met to date. This will only be the second time in 2021 that Grayson and Uno have been partners in a tag match, but there shouldn't be any ring rust between two men who have been teaming together for nearly 15 years. Can Sky and Page continue their winning ways or will the experience of Uno and Grayson prove to be too much?

"Hangman" Adam Page vs. "The Bad Boy" Joey Janela - The meeting of these two men comes with "The Machine" Brian Cage looming prominently in the background for a couple of different reasons. On Sunday night's PPV, Page will meet Cage in a rematch from the April 22 edition of Dynamite when The Machine handed Page his first loss in singles competition since last November. The loss to Cage came with Hangman sitting atop the AEW Rankings, taking Page out of contention for an AEW World Championship match with former tag-team partner "The Cleaner" Kenny Omega. For Janela, Cage was the opponent for his partner, Sonny Kiss, on this past Tuesday night's AEW Dark. After Cage put Kiss away with the Drill Claw, Kiss was jumped by Cage's Team Taz stablemate Hook. Rather than defend Kiss, Janela stood and watched, eventually slinking away as the beating to Kiss continued. Before Janela can answer for his behaviour, he must meet Page for the second time in their careers in one-on-one action. Page defeated Janela at the inaugural All In in 2018 in a brutal Chicago Street Fight. Will Page pick up a victory ahead of his return engagement with Cage or will Janela even up his record against the Hangman?

Darby Allin (w/ Sting) vs. Cezar Bononi (w/ Ryan Nemeth) - When Darby Allin lost his TNT title to Miro two weeks ago on Dynamite, it was the first time that the Seattle native had tasted defeat in a singles match in over a year. The former champ returns to the ring for the first time since dropping his title when he takes on The Wingmen's Cezar Bononi. While the big Brazilian possesses a noticeable size advantage over his opponent, being the smaller dog in the fight is nothing new for Allin. Bononi heads into Friday's match coming off of a win over another smaller opponent, Marko Stunt, in his last outing. Can Allin slay another giant or will he and Sting find themselves too preoccupied with Sunday's match against Scorpio Sky and Ethan Page to focus on the task at hand?

- Eric Bischoff hosts a celebration of the Inner Circle ahead of Sunday night's Stadium Stampede where, should they lose to The Pinnacle, they must disband