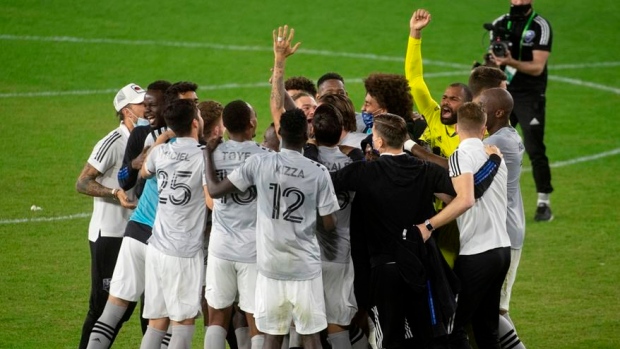 Major League Soccer confirmed its playoff schedule on Monday, starting with two play-in matches to set up Round 1 that opens Nov. 21.

The No. 9 seed Montreal Impact play the No. 8 New England Revolution, and seventh-seeded Nashville SC is pitted against 10th-seeded Inter Miami FC to determine the final two playoff spots in the Eastern Conference, with both matches on Nov. 20.

Orlando City SC (No. 4 seed) will face New York City FC (No. 5 seed), and Columbus Crew SC (No. 3 seed) plays the New York Red Bulls (No. 6 seed) on Nov. 21 to open the first round of Eastern Conference playoffs.

Toronto FC (No. 2 seed) will play the higher-seeded play-in winner, and the Philadelphia Union (No. 1 overall seed) will face the lower-seeded winner from the play-ins, on Nov. 24.

The first of three Western Conference matches go Nov. 22 — Sporting Kansas City (No. 1 seed) against the San Jose Earthquakes (No. 8 seed), Minnesota United FC (No. 4 seed) versus the Colorado Rapids (No. 5 seed) and the Portland Timbers (No. 3 seed) against FC Dallas (No. 6 seed).

The reigning MLS Cup champion Seattle Sounders FC (No. 2 seed) face Los Angeles FC (No. 7 seed) on Nov. 24 to wrap up the opening round in the west.

Because of pandemic-related game cancellations ruing the regular season, playoff seedings are being determined by points per game rather than total points.