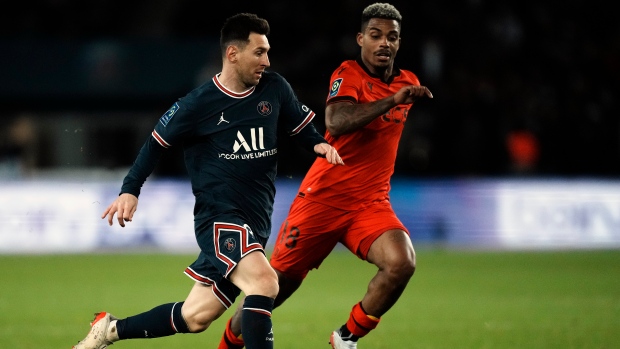 PARIS (AP) — Paris Saint-Germain dropped points at home for the first time this season by drawing 0-0 with Nice in the French league on Wednesday as the high-powered attack led by newly crowned Ballon d'Or winner Lionel Messi came up empty.

Nice goalkeeper Walter Benitez parried Kylian Mbappe’s low strike in the 27th minute and denied Angel di Maria in the 51st. PSG goalkeeper Gianluigi Donnarumma was less busy but still had to push behind Andy Delort’s close-range header in the 32nd to help maintain a 12-point lead atop the standings.

PSG had won every previous home game in all competitions this season and was on a four-game winning streak in the league.

“We are very proud of our performance,” Nice defender Dante said. “We wanted to attack a bit more, we wanted to control possession a bit more when we had the ball. But I think that the whole team made a lot of effort. And that’s what we had to rediscover.”

Before kickoff, Messi showed the spectators the record seventh Ballon d’Or trophy he won Monday as the world's top player. But PSG seemed to miss his injured attacking partner Neymar as the team lacked presence in the box, with Mbappe often playing on the left wing in the Brazilian's absence.

Nice should have scored in the 59th but Kasper Dolberg hit the post with a header from two yards.

Messi then slipped a through ball to Mbappe, who missed the target from 10 yards in the 64th.

Marseille climbed to second place by edging Nantes 1-0 after Brazilian midfielder Gerson controlled a pass from Dimitri Payet and buried the ball into the bottom corner in the 30th. Nantes defender Nicolas Pallois was sent off after receiving a second yellow card in the 32nd.

Rennes fell to third place after losing 2-1 to defending champion Lille. Portuguese duo Renato Sanches and Xeka scored for Lille in the first half, while. Rennes midfielder Benjamin Bourigeaud netted a consolation goal in the 85th.

Reims stunned mid-table Lyon 2-1 as substitute Hugo Ekitike capitalized on a blunder by Lyon goalkeeper Anthony Lopes to score the winner in the third minute of stoppage time. Lyon hosted Reims without spectators after the league sanctioned the club for incidents at the Groupama stadium on Nov. 21 when Dimitri Payet was hit on the head by a bottle of water thrown from the stands in a game that was abandoned.

Mohamed Bayo salvaged a point for struggling Clermont with a 65th-minute equalizer to secure a 2-2 draw with fifth-place Lens that lifted the club out of the relegation zone.

Germany international Kevin Volland helped Monaco beat Angers 3-1 and move into seventh place by setting up Dutch striker Myron Boadu in the 25th and Sofiane Diop in the 45th. Angers pulled one back in the 55th when Azzeddine Ounahi’s low drive bounced off goalkeeper Alexander Nübel and into the net, but Axel Disasi restored Monaco’s two-goal lead with a close-range effort in the 73rd.

Strasbourg climbed to sixth place, level on points with Monaco, by thrashing Bordeaux 5-2. Ludovic Ajorque scored twice to raise his tally to eight goals this season, while Adrien Thomasson, Kevin Gameiro and Dimitri Lienard also netted for the hosts.

Montpellier moved into the top half of the table by downing lowly Metz 3-1 with goals from Teji Savanier, Stephy Mavididi and teenage striker Elye Wahi.

Brest won a fifth straight game by edging bottom side Saint-Etienne 1-0 thanks to Romain Faivre’s spot kick into the top corner in the 64th after Saint-Etienne midfielder Lucas Gourna had handled the ball.