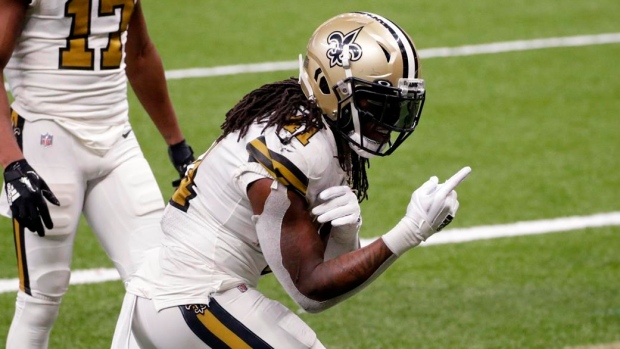 Week 7 in the NFL concludes tonight on TSN as the New Orleans Saints visit the Seattle Seahawks on Monday Night Football.

Seattle has dropped three of its past four games and is missing the heart and soul of its team in quarterback Russell Wilson, who’s out until at least Week 10 with a finger injury.

New Orleans is fresh off its bye week, after alternating wins and losses over its previous five games. The Saints opened as a 3.5-point favourite, but that line now sits at -4 or -4.5, depending on where you look.

The game features a low total of 42, which isn’t surprising given the quality of quarterback play we’re likely to witness.

New Orleans is doing everything they can to keep the ball out of Jameis Winston’s hands. They’re essentially operating a 1950’s style offence, throwing the ball only when it’s absolutely necessary.

The Saints boast the league’s lowest passing rate at 45.26 per cent, which is more than 20 per cent lower than the defending champion Tampa Bay Buccaneers.

That style of play is fine in favourable game scripts, but it presents plenty of issues when trailing. However, it’s hard to blame Sean Payton and company for choosing that strategy, given that they have zero playmakers outside of Alvin Kamara.

He has missed just 2 games because of injury in his career.

In 5,302 career snaps, he has committed just 3 penalties.

He has been the hallmark of reliability, dependability & durability.

With Michael Thomas still hurt, the Saints’ No. 1 wideout is Marquez Callaway, a former undrafted free agent. After him, the wide receiver corps consists of Deonte Harris, who’s already been ruled out for Monday, Lil’Jordan Humphrey, and Kenny Stills, who’ve combined to catch just 16 passes all season.

Not surprisingly, Kamara has shouldered the brunt of the offensive burden, leading the team in both rushing yards and targets.

AK makes it look so smooth into the endzone for the #Saints TD!#WFTvsNO | 📺: FOX pic.twitter.com/AtiqVhnZUF

Kamara is set up for monster usage again on Monday night, and the matchup is very appetizing. Seattle allows an average of 181.5 total yards to enemy running backs this season, while yielding the second most receiving yards to opposing RBs.

When Winston does drop back to throw, expect Kamara to be his No. 1 option.

With Wilson down, Geno Smith will draw his second straight start for the Seahawks.

The former second-round pick has played decently in Wilson’s absence, but not well enough to prevent the Seahawks from reportedly calling around for other options.

From NFL Now: Cam Newton is fully vaccinated and has been talking to the #Seahawks. We'll see if anything comes of it. pic.twitter.com/FlbDltgY0J

Smith has completed 67 per cent of his passes through a game and a half for 340 yards, two touchdowns and an interception.

He’s shown solid chemistry with DK Metcalf, connecting on nine of 10 throws in his direction, but has not been on the same page with Tyler Lockett.

Smith is just 3-of-11 when targeting Lockett, and that will need to improve on Monday with the Saints’ top corner Marshon Lattimore likely shadowing Metcalf.

The Seahawks are also battling injuries in their running back room. Starter Chris Carson is on IR, while Alex Collins, who put up 101 rushing yards and a score in Week 6, will play despite battling a groin injury.

New Orleans enters play as the third-highest graded defence by DVOA, ranking ninth against the pass, and second versus the run.

Neither the point spread nor total is particularly appealing in this matchup, although it is worth noting that Winston-led teams have struggled throughout his career covering as a favourite.

What is appealing is the over on Kamara’s rushing and receiving yards prop. The line is currently set at 127.5, which is a number he can certainly exceed given his usage.

Kamara is on pace for a career-high 371 touches and is the Saints best option whether they’re running or throwing the football.

New Orleans grades out as the second best rushing unit per Pro Football Focus, while only the New York Jets and Detroit Lions have coughed up more running back production than the Seahawks.