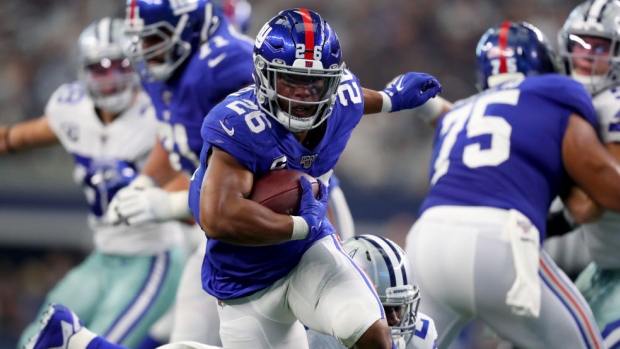 Week 11 in the NFL concludes on Monday Night Football live on TSN as the New York Giants visit the Tampa Bay Buccaneers.

The Bucs are fresh off back-to-back losses for just the second time in the Tom Brady era, but still sit comfortably atop the NFC South standings.

Meanwhile, the Giants are playing their best football of the season. They’ve won two of their past three games, with their lone loss during that stretch coming by a field goal on Monday Night Football a couple weeks ago.

Tampa Bay is currently a 10.5-point favourite, in a game that features a total of 49.5.

Bucs looking to bounce back

The Bucs have bookended their Week 9 bye with losses at New Orleans and at Washington. Now they return home, where they’ve yet to taste defeat this season.

Their last time out versus Washington, Tampa Bay was held to a season-low 19 points, while Brady was limited to just 220 passing yards. For the second consecutive game, he threw two interceptions, while posing a season-worst 31.5 QBR.

Despite the disappointing performance, Brady still enters Week 11 leading the league in touchdown passes (27) and passing yards per game (318.9).

He’s led the Buccaneers to the No. 1 offensive ranking per DVOA and should get Rob Gronkowski back on the field for this matchup. Gronk, who started the season red hot, has missed five of the past six games with a variety of injuries.

Rob Gronkowski: "I never got shot before, but that’s what it felt like."

Speaking about the injury he suffered against the #Rams pic.twitter.com/UPuHsuwktp

The big tight end is not only one of Brady’s favourite weapons in the red zone, he’s also an elite run blocker. New York ranks 30th per DVOA in run defence, compared to 11th against the pass, and having Gronk back on the line could help expose the Giants on the ground.

As for Antonio Brown, another one of Brady’s favourite targets, don’t expect to see him on Monday. AB is still nursing an ankle injury and is now caught up in yet another off-the-field scandal.

New York’s defence has been carrying the team over the past three games, but the offence got some good news this week. Saquon Barkley is ready to return, and his electric playmaking is bound to help the Giants’ 25th offensive DVOA ranking.

Barkley hasn’t played since Week 5 due to an ankle injury but was coming off his best two performances of the season prior to going down.

What I’ve gathered on the Giants’ injury front:

• LT Andrew Thomas is expected to be activated from IR.

From the questionable group:

• TE Kaden Smith (knee) is not expected to play.

The Buccaneers are incredibly stout versus the run, ranking fourth per DVOA, but can be had in the passing game. Tampa Bay has allowed the 11th most passing yards per contest this season, which should elevate Daniel Jones’ outlook.

Jones has thrown for 242 yards or less in four straight games but has done a much better job this season of protecting the football. Outside of one miserable outing versus the L.A. Rams, Jones has thrown just two picks.

We asked for growth and consistency this year. He may not be elite but hes not the main problem.

Defensively, the Giants have held their last three opponents to just 39 total points but were dealt a major blow earlier this week. Team captain and safety Logan Ryan tested positive for COVID-19 and is doubtful to be cleared in time to play on Monday.

We were on New York catching double-digit points two weeks ago on Monday Night Football and they didn’t disappoint, covering easily against the Chiefs. We’re going right back to the well in this spot, and there’s plenty of trends to support the decision.

As for props, there’s a couple anytime touchdown scorers to target. Leonard Fournette, based on New York’s atrocious run defence is a strong bet, as is Mike Evans, who leads the NFL since Week 5 with 7 touchdown catches.