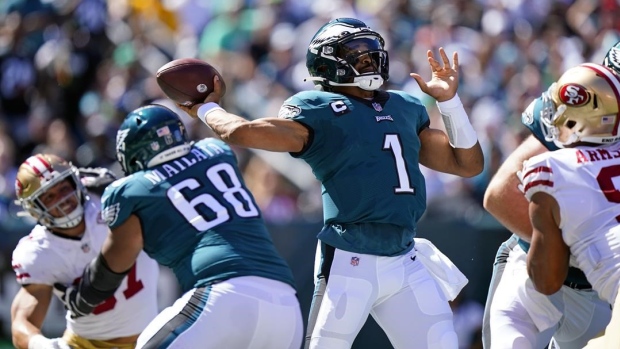 Week 3 in the National Football League concludes on Monday Night Football live on TSN as the Philadelphia Eagles visit the Dallas Cowboys.

The NFC rivals are each off to a 1-1 start, but Dallas enters with a little momentum after upsetting the Los Angeles Chargers last week as a 3.5-point underdog.

After posting a road win over the Atlanta Falcons in Week 1 as an underdog, Philadelphia returned home last Sunday but fell 17-11 to the San Francisco 49ers.

The Cowboys opened as a four-point favourite, but that number is down to -3 or -3.5 at most sports books.

The Jalen Hurts-led Eagles enter Monday’s contest with an extremely favourable matchup on offence. Dallas is down three of its top-four pass rushers, which should equal a clean pocket for Hurts for most of the night.

The sophomore quarterback has completed only 46.7 per cent of his throws under pressure this season, but that number skyrockets to 74.4 per cent when kept clean.

The Cowboys must be concerned with more than Hurts’ arm. He ranks second among quarterbacks in rushing yards (144) behind only Lamar Jackson and has racked up four touchdowns on the ground in his past five starts dating back to 2020.

Philly’s young, explosive receiving corps led by DeVonta Smith has impressed, and should be able to exploit a below average Dallas secondary.

The Cowboys have surrendered an NFC-high 692 yards through the air but have bailed themselves out by picking off four passes.

Jalen Hurts has made 6 career starts.

He's the only player since 1950 to throw for 1,300 yards and rush for 400 yards in his first 6 career starts.#Eagles #FlyEaglesFly pic.twitter.com/UXg8guigmH

How ‘bout them Cowboys

On the other side of the ball, Dallas features one of the most explosive offences in the league. They rank fourth in total yards per game and have elite talent at the skill positions.

Dak Prescott has completed 76.5 per cent of his passes through two weeks and has eclipsed 400 passing yards in four of the past five games he’s started and finished.

Monday vs. Eagles is Dak Prescott's first game at AT&T Stadium since Oct. 11 ankle injury. Final box to check in recovery? "All those boxes are checked. I think this will just be a great one" to play in front of home fans. "I'll take a moment. I won't take anything for granted."

After a quiet Week 2 for Amari Cooper and CeeDee Lamb, this is a major bounce-back spot for the Cowboys’ star receiving duo. Cooper has racked up at least 100 receiving yards in three straight contests versus the Eagles at home, while Lamb has caught at least five passes in every game he’s played alongside Prescott.

Philadelphia ranks below league average in coverage per PFF and suffered a major loss to its pass rush when Brandon Graham went down last week with an Achilles tear.

In addition to the overs on Hurts’ passing props, another player to target in the prop market is Smith.

The 2021 first-round pick has seen 15 targets through two weeks, four more than any other Eagle. The Cowboys have allowed at least 90 receiving yards to four wide receivers already, and their top-three corners have combined to yield a 63 per cent catch rate.

Smith over 54.5 receiving yards is a buy.

As for the game, take the points. The Cowboys are 1-6 against the spread as a favourite since the start of last season, including 0-5 ATS at home.