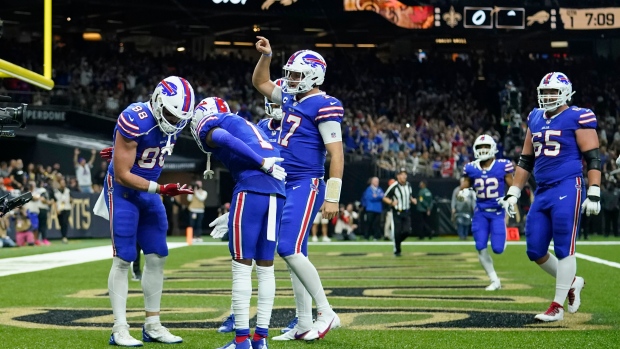 Week 13 in the NFL concludes with Monday Night Football live on TSN as the New England Patriots visit the Buffalo Bills.

This is the most compelling game on the Week 13 slate, and could go a long way towards deciding the eventual AFC East champion.

New England will enter tonight on a six-game winning streak, and at 8-4 hold a slim lead atop the division over Buffalo, who sit at 7-4. The Bills have alternated wins and losses over their past four contests after starting the season 5-2.

Buffalo opened up as a three-point favourite, while the total was set at 45. Both of those numbers have since been shortened, as the Bills are now favoured by 2.5-points, while the over/under is down to 42.5.

A major reason for the total dropping is the nasty weather currently projected. The temperature is expected to be around minus-3, with sustained winds of 40 km per hour.

Evenly matched across the board

By the numbers, New England and Buffalo are two of the best teams in not only the AFC, but the NFL as well.

They rank first and second in point differential, and second and third respectively per DVOA.

The Bills own the league’s top defence per DVOA, while the Pats own the second best.

New England has the slight advantage per DVOA on offence, but Buffalo averages more yards and points per drive than their division rival.

Both teams are top-five contenders in the Super Bowl
56 futures market, but there’s a chance we may be overvaluing the Pats based on their recent six-game winning streak.

Only two of the Patriots’ victories during their streak have been against opponents with winning records, with their latest win coming versus a Tennessee squad missing its top three offensive skill players.

"What an amazing defense!"

To date, New England has faced the league’s third easiest schedule, ahead of only Denver and Cincinnati.

Much will be made leading up to this game about the Patriots perceived advantage in the run game, but let’s pump the brakes on that as well.

Yes, the Bills allowed Indy’s Jonathan Taylor to run wild in a loss two weeks ago, but they were missing both Tremaine Edmonds and Star Lotulelei, two of their best run defenders.

With freezing cold temperatures and nasty winds looming, the ground game will be emphasized even more on both sides, with Josh Allen’s legs potentially being the X-factor.

Rushing efficiency is not a big part of rookie Mac Jones’ arsenal, so look for the Pats to rely heavily on the duo of Damien Harris and Rhamondre Stevenson.

These two teams are incredibly even matched, but if Buffalo wants to keep its division title hopes alive, and have any chance at the conference’s top seed, they need to win this game.

Per ESPN’s FPI, the Bills chances to win the division jump to 84 per cent should they emerge victorious on Monday night, and I like them to squeak out a close, hard-fought win.