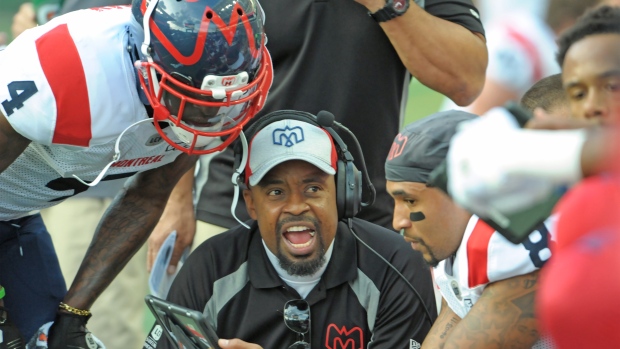 The Alouettes announced Friday that they are close to bringing back head coach Khari Jones after he led the team to a 10-8 record in his first season at the helm.

Team president Patrick Boivin said at the club's end of season review news conference that not all the details have been formalized but the process is moving in a positive direction.

#MontreALS Khari Jones says he feels confident that he will be back with the team next season. Pres. Patrick Boivin says that not all the details have been formalized but the process is moving in a positive direction.

Boivin added the team’s new owners-in-waiting are being informed of the progress of Khari Jones’ probable extension, but they are not directly involved in the negotiations.

#MontreALS Patrick Boivin says the team’s new owners-in-waiting are being informed of the progress of Khari Jones’ extension, but they are not directly involved in the negotiations. #CFL

Jones took over from Mike Sherman on an interim basis just before the start of the season. Sherman went 5-13 with the team the year before.

While Jones’ on-field results speak for themselves, questions surround his future considering he does not have a contract beyond the 2019 season as well as the murkiness regarding ownership of the club.

The team potentially committing to Jones long-term seems like a popular move with the locker room.

“Jones gives us the freedom to express ourselves,” said kicker Boris Bede after the team’s loss to the Edmonton Eskimos in the Eastern semi-final.  “And he believes in us. He’s always listening. It really gives you the desire to play well.”

“We all want him back,” veteran defensive end John Bowman said, whose own future is in question. “The city wants him back, everybody on this team wants him back. Without any hesitation, he’s the guy for this team.”