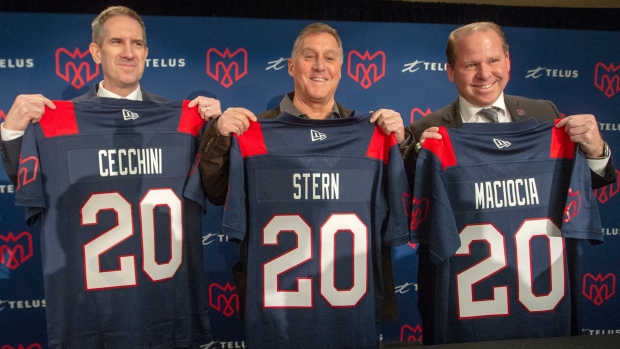 MONTREAL — Danny Maciocia is returning to the Montreal Alouettes as general manager.

Maciocia, the head coach of the University of Montreal Carabins since the 2011 season, was unveiled as the CFL club's GM today by new co-owner Gary Stern.

The Alouettes also announced the hiring of Montreal businessman Mario Cecchini as president, exactly one week after Stern and Toronto business partner Sid Spiegel were introduced as new owners of the franchise by the CFL.

The Montreal-born Maciocia held several assistant coaching roles with the Alouettes from 1996 to 2001 before joining the Edmonton Eskimos as offensive co-ordinator.

Maciocia went on to be head coach of the Eskimos from 2005 to 2008, winning the Grey Cup in his first year. He also was the Eskimos' director of football operations from 2007 to 2010 before being fired.

At the University of Montreal, Maciocia guided the Carabins to three Vanier Cups, winning the national title in 2014.

Maciocia will not get to hire his own coach, as the Als break away from CFL tradition.

The Als, then owned by the CFL, gave head coach Khari Jones a three-year contract extension after he led Montreal to the playoffs for the first time since 2014 last year.

"I don't think I would have done it any differently," Maciocia said Monday.

"When you just take a look at what coach Jones had to deal with last year under these difficult — tremendously difficult — circumstances, I don't see how you don't give him a three-year deal," he told reporters.

Jones, 48, became Montreal's head coach less than week before the start of the 2019 campaign when Mike Sherman was fired. Despite that, the Alouettes (10-8) exceeded all expectations under Jones, finishing second in the East Division and posting their first winning record since 2012.

He and football operations director Eric Deslauriers have spearheaded Montreal's off-season preparations. That includes re-evaluating the Alouettes' final roster, prioritizing their pending free agents and anticipating which players might be worth pursuing once CFL free agency begins Feb. 11.

"Is there work? Absolutely. Do we have some issues with the roster? I'm not going to lie to you, I'm going to be transparent: Yes we do," Maciocia said.

"As far as timetables are concerned, we're clearly behind the 8-ball," he added.

Defensive lineman John Bowman, who was an East Division all-star last year at age 37, is pondering retirement. Montreal won't have rushing leader William Stanback (1,048 yards) next season as he recently signed with the NFL's Oakland Raiders.

The CFL took over the franchise from American businessman Bob Wetenhall last May.