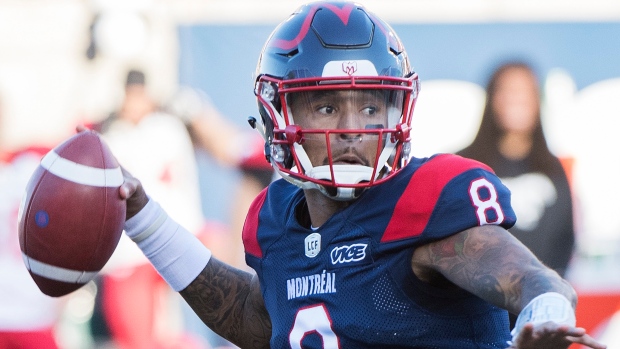 MONTREAL — Having already clinched a playoff spot, the Montreal Alouettes are looking at the final three games of the year as a post-season tune-up.

The Alouettes (8-7) host the Toronto Argonauts (3-12) on Friday in a game with no bearing on the CFL standings.

Montreal is guaranteed to finish second in the East Division behind the Hamilton Tiger-Cats (12-3). Toronto and the Ottawa Redblacks have already been mathematically eliminated from playoff contention.

After Friday's clash with Toronto, Montreal travels to Hamilton next week before welcoming the Redblacks to Percival Molson Stadium in the season finale.

The Als, who will make their first playoff appearance since 2014, will host the fourth-place finisher in the West Division in the East semifinal on Nov. 10.

Coach Khari Jones says he does not want to tamper with the successful blueprint that got the Alouettes into the playoffs. He has no intention of resting too many starters or playing his backups.

"Even if these games seem meaningless because they won't change anything in the standings, we really need them," said linebacker Henoc Muamba. "Last week, we made mistakes that we need to correct. We need these three games to get better.

"I truly believe we have all the pieces in our dressing room. Now it's about getting on the same page and communicating well."

The Alouettes are coming off a tough 35-24 loss in Winnipeg against the Blue Bombers last week. Quarterback Vernon Adams Jr. had one of his worst games of the season, throwing four interceptions in the second half and fumbling once.

Montreal has lost three of its last five following a three-game win streak.

"We hate losing," said Lewis, who enters Friday's game with 937 receiving yards. "We have to get that taste out of our mouth. You learn a lot after you lose, you look at the things you could have done better. The things we did wrong, we can't do them again this next game.

"Personally, I'm a sore loser. And there are other sore losers on this team. We'll never accept or get used to losing."

The end of a difficult season can't come soon enough for a Toronto side that won the Grey Cup just two years ago.

The Argos are coming off a rare victory after they defeated the last-place Redblacks 28-21 last week. The win snapped a three-game losing skid.

McLeod Bethel-Thompson will get the start at quarterback with James Franklin and Dakota Prukop serving as backups. The Argonauts, who have a new general manager in Michael (Pinball) Clemons, need to decide who will be the team's starter next year.

Bethel-Thompson threw for 300 yards and two touchdowns in Toronto's win over Ottawa.

"They have jobs to play for. They have pride to play for," Adams said of Friday's opponents. "They don't want to just go out and let anybody walk all over them. They're going to be playing hard. They want to get us off our groove."

HEALTH UPDATE: Alouettes running back William Stanback, who missed last game against Winnipeg, practised with the team this week and will likely face Toronto. However, Als defensive end John Bowman missed practice this week and is a game-time decision.

WALKER OUT: The Argonauts are down a target in the backfield after placing receiver Derel Walker on the one-game injured list. Chandler Worthy will replace him.

PLAYOFF FEVER: More than 10,000 tickets have already been sold for the East Division semifinal on Nov. 10 — the first playoff game in Montreal since 2014.