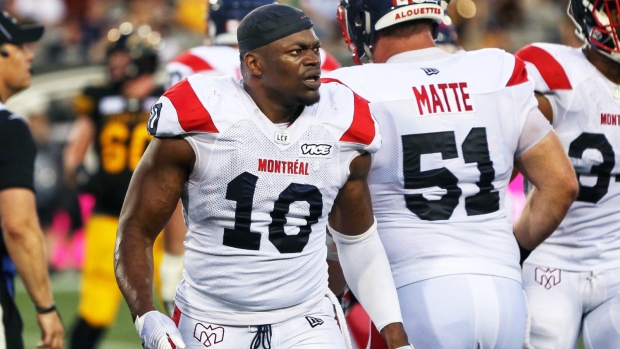 While he socially isolates with his family inside their Brampton, Ont., home, Montreal Alouettes linebacker Henoc Muamba is reaching out to teammates to mentor and encourage them during a challenging time.

One of those teammates Muamba contacted is Alouettes wide receiver Quan Bray. In February, Bray and NFL offensive lineman Greg Robinson were arrested in Texas for allegedly possessing 157 pounds of marijuana.

“We had a short conversation I just tried to check in on [Bray] and check on his mental state and his attitude," says Muamba. "[Bray] seems to be pretty well so far."

If convicted, Bray could face up to 20 years in prison.

“It’s tough, it’s a guy [Bray] I’ve known before he came to Montreal - we were teammates with the Indianapolis Colts," Muamba says. "I hope it’s something [Bray’s legal situation] that he learns from, but not only him, others that are around him as well. I try to reach out to him to show some type of support and encouragement as well."

In his role as the Alouettes team representative to the CFL Players' Association, Muamba keeps in near daily contact with many of his Montreal teammates.

The eight-year CFL veteran is optimistic there will be a 2020 CFL season, but Muamba is also preparing himself and his teammates for the possibility the football season could include playing in empty stadiums with reduced player salaries, potential quarantines, and rigorous testing.

“Unfortunately, at this moment, there is a lot of things that we’re not in control of, and we have to wait for the government to take action first on things like border restrictions [allowing American players to come to Canada]," Muamba says.

Even though off-season training is now difficult for every athlete, Muamba says connecting with other Alouettes helps him and his teammates stay mentally engaged and accountable.

“One of the things I did is become a better leader by becoming pro-active” says the 31-year-old. "I’ve been really intentional is contacting a lot of my teammates this off-season, welcoming new guys as well as reaching out to some of the coaches.

“I’m trying to prepare myself mentally to be able to be the best that I can be despite all the changes that may occur.”

Muamba, who immigrated to Canada from Zaire (now the Democratic Republic of the Congo) as a child, uses his story as a way of connecting with other athletes and exploring their personal journeys.

"My story and where I have gotten to is a testament to the people around me," Muamba says. "It shows the discipline I had to endure and the people who had to speak life into me."

Muamba posted interviews with Olympian Phylicia George and CFL Hall of Famer Michael "Pinball" Clemons to his Instagram account. While in isolation, Muamba is attempting to schedule an interview with UFC legend Georges St-Pierre.

“A lot of times, you go through so many things and it’s gruelling and it’s hard," Muamba says. "But, the wise people not only learn from their own lessons, but they also learn from the lessons of others.”