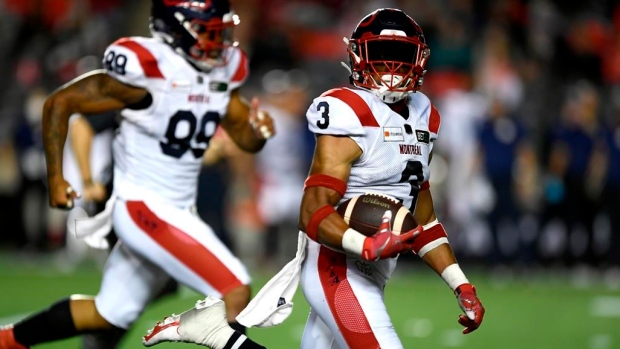 The Montreal Alouettes linebacker guaranteed Monday his team would beat the Hamilton Tiger-Cats in the East Division final. Five days later, he wasn't changing his tune.

"That's not going to change," Levels told reporters Saturday. "Anything less than winning this game right now is a failure to the season.

"My mentality is that it's all or nothing. I'm putting all my chips on the table right now because I don't have anything guaranteed."

Levels' guarantee made headlines across the CFL even though every pro athlete fully expects to win every game they participate in. Hamilton linebacker Simoni Lawrence, one the league's best trash talkers, chuckled when told of Levels' comments.

"I'll be honest, it makes me laugh," Lawrence said. "We're all grown men, some people might not like what he said, but we’re all grown men and we're going to get the chance to prove whatever on Sunday.

"It's one of those things where you gotta show it."

Levels was surprised at the controversy his comments generated.

"Yeah, it was kind of mind-blowing," he said. "But then I also understand everybody can't put that pressure on themselves, if that's what you want to call it.

"Pressure busts pipes, not people so I don't see the pressure, I don't feel the pressure. This is what I do, I've been playing this game since I was three years old."

Levels said a big reason for his confidence is just how prepared he and the Alouettes are for Sunday's game.

"As a kid you just went out there and played the game and you didn't know what was going to happen," Levels said. "I have expectations now, I know what I'm going to do.

"I am prepared, my teammates are prepared. Our coaches have prepared us so to say anything besides we're going to win would be a slap in the face to all the preparation that my coaches have put in."

And there's no doubt in Levels' mind that Hamilton players don't feel the exact same way he does.

"What I said was no disrespect to any one of those guys," Levels said. "I know they think they're going to win the game and nobody is saying anything about that.

"They get to laugh and joke and think what I said is funny. OK, happy teams get their butts whupped. I'm not happy. We haven't done anything yet. We've made the playoffs (at) 7-7. OK, now I've got a fresh start. (In the) playoffs you get baptized, my sins have been washed, now it's time to go."

The five-foot-11, 187-pound Levels is completing his fourth CFL season and second with Montreal. The 27-year-old Dallas native had 42 tackles, three sacks and an interception this season.

Levels, who played collegiately at Baylor, began his CFL career in 2017 with the Calgary Stampeders. He and Hamilton running back Don Jackson were teammates in Alberta in 2018 but will be rivals Sunday as Jackson gets the start for the Ticats.

Levels left little doubt that the two will be on a collision course Sunday.

"I love him to death," Levels said. "Don Jackson is a great running back, a physical running back.