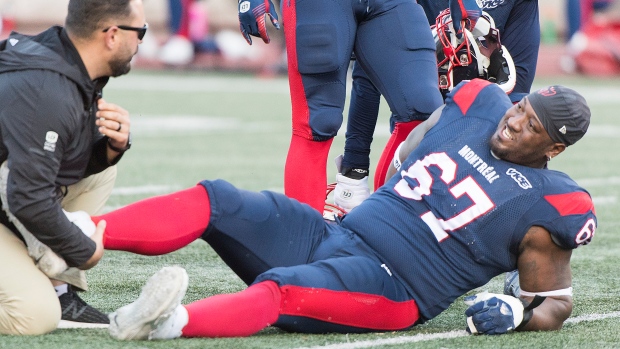 Montreal Alouettes left tackle Tony Washington suffered a broken leg in his team's win over the Calgary Stampeders on Saturday and will be out for the rest of the season.

Washington, who suffered the injury when Alouettes quarterback Vernon Adams Jr. fell on his, underwent surgery.

The 33-year-old Washington has played in 13 games for the Alouettes this season, his second in Montreal, patrolling the left tackle spot.

In other Alouettes injury news, cornerback Ryan Carter is listed as week-to-week with a hamstring injury also suffered on Saturday and linebacker Tevin Floyd will miss Saturday's game against the Winnipeg Blue Bombers with a lower-body injury suffered against the Stamps.

And veterans Tommie Campbell, DeVier Posey, and Jeremiah Johnson all missed Tuesday's practice for maintenance but are expected to return to practice Wednesday.