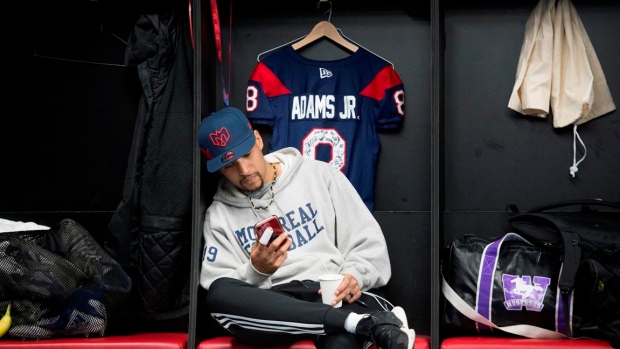 The Alouettes sung their coach's praises while cleaning out their lockers on Monday, a day after losing the East Division semifinal 37-29 to the Edmonton Eskimos.

The consensus: Jones was a major reason for Montreal's success this year and the team would be making a big mistake by not re-signing him.

"We all want him back," said veteran defensive end John Bowman. "The city wants him back, everybody on this team wants him back. Without any hesitation, he's the guy for this team."

Bowman is contemplating retirement again despite having a year remaining on his contract. The 37-year-old says it would be difficult to return if Jones is not the head coach.

"He instils confidence in everyone in here," said Bowman, who completed his 14th CFL season. "He makes everyone feel like they're important. Just the way he talks to people. He lifts them up. He knows about people's families. He's not just a coach. He's in here trying to learn about us as individuals."

Jones was rushed into the head coach role when the Alouettes fired Mike Sherman right before the start of the regular season. He also juggled offensive co-ordinator responsibilities and a few general manager duties this year.

The 48-year-old from Indiana, with no previous head coaching experience, defied expectations by leading Montreal to a winning record (10-8) and the team's first playoff appearance since 2014.

The club's entertaining performances, even in tight losses, and its never-say-die attitude revitalized the city's love for football. There were 21,054 fans packed inside Percival Molson Stadium for Sunday's playoff game.

"Jones gives us the freedom to express ourselves," said kicker Boris Bede. "And he believes in us. He's always listening. It really gives you the desire to play well. Nobody in this locker room thought we were going home today. We had the right players and we could have won the Grey Cup. That all starts with Khari."

Added free agent running back William Stanback: "I love coach Khari. He's given me the opportunity to succeed. He gave me the chance to fill big shoes, to be a part of it. I would love for him to be my head coach again."

Some players say they have even lobbied team president Patrick Boivin and urged him to offer Jones a new deal.

What makes things complicated in Montreal is the organizational uncertainty at every level, starting with the lack of ownership.

The team's previous owners, the Wetenhall family, sold the troubled franchise to the CFL back in May and the league has been looking for new buyers ever since.

Those new owners would need to fill the vacant general manager position following the departure of interim GM Joe Mack, who replaced Jones four games into the season.

And it would be up to the new general manager to appoint a head coach, who would then select his coaching staff – something Jones did not have the luxury of doing this season.

Until those top positions are filled, everyone else is left in the dark.

"We're all just waiting in limbo," said Bowman. "We don't have an owner, Khari doesn't have a contract. I might be the only one under contract. We're going to wait and see and hopefully he's back."

For the first time in years, though, there is no uncertainty at the quarterback position for Montreal.

Vernon Adams Jr. had a breakout year and will continue to run the Alouettes offence next season. The 26-year-old took charge of Montreal's playbook after starter Antonio Pipkin suffered an injury in the season opener.

Adams quickly became one of the year's best quarterbacks.

He led the league in combined touchdowns with 36 and his 3,942 passing yards ranked fourth. The versatile five-foot-11 QB was equally dangerous with his running game, adding 394 yards on 82 carries. His four come-from-behind wins were a CFL best.

"This year was my first year getting into it," said Adams, who is under contract through next season. "For this off-season, I already wrote down a bunch of goals, everything I need to work on. I'm going to work my heart out.

"I'm only going to get better from here and I promise you that."