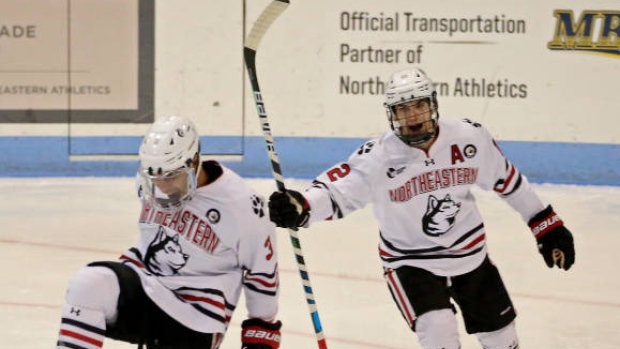 The No. 2-ranked Boston College Eagles host the No. 14 Northeastern Huskies tonight to kick off a home-and-home series between the two teams.

It’s a chance for Montreal Canadiens fans to get a glimpse of the future as prospect defencemen Jordan Harris and Jayden Struble will hit the ice for Northeastern, looking to continue their strong seasons.

Harris, 20, is in his third season with Northeastern. In 11 games so far in 2020-21, the Huskies’ assistant captain has five goals and 10 points. His five goals this season is a career-high.

The Haverhill, Mass. native was drafted in the third round (71st overall) by the Habs at the 2018 NHL Draft. He helped the Huskies win a Hockey East Championship in 2018-19 and back-to-back Beanpot titles in 2019 and 2020, including scoring the double overtime game-winner against Boston University in 2020.

Drafted in the second round (46th overall) by the Habs at the 2019 NHL Draft, the 19-year-old blueliner has already tied his points total as a freshman in 10 fewer games. He had three goals and 10 points in 21 games as a rookie.

Northeastern goaltender Devon Levi, fresh off earning silver with Team Canada at the World Junior Championship in Edmonton, will have to wait a little longer to make his NCAA debut as he is out tonight with an upper-body injury.