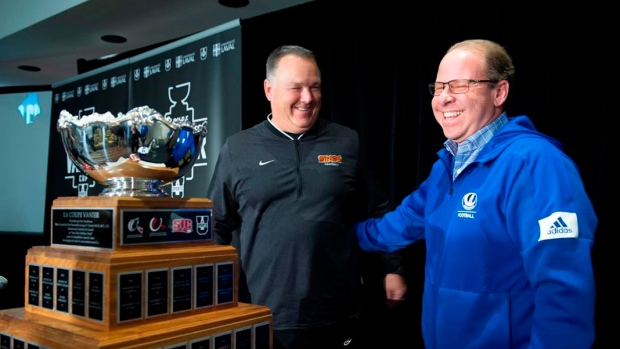 The Carabins (9-2) face a stiff test against star quarterback Adam Sinagra and the Dinos (9-2) in the 55th Vanier Cup at Telus-UL Stadium on Saturday.

"It has kept me up and I had a few sleepless nights this week, going to bed at 3 or 4 in the morning," Maciocia, the only coach to win both the Grey Cup (2005 Edmonton), and the Vanier Cup (2014 Montreal), said at a pre-game press conference on Thursday.

"This is the best offence we're going to face. Adam Sinagra is the best quarterback in the country, and they have a very diversified offence."

One of Maciocia's concerns is Calgary's offensive line, which he considers bigger than most CFL teams. Add the Philpot twins (receivers Tyson and Jalen) to the mix, and the Carabins head coach is realistic about the challenge.

"We won't be able to shut them down. We are gonna try to limit them, and that, in itself, is quite a challenge," Maciocia said.

"Defensively, they have been outstanding all season long," said Harris. "Their defence has kept their opponents out of the end zones, and when you do that, you win football games."

Harris is not taking Montreal's offence lightly either.

"They have a great running game, and their wide receivers have explosive speed. The Carabins offence has been producing in the playoffs and it will be a challenge as well for our defence," he said.

Asked if he knew which team the crowd will be cheering for in Quebec, Harris decided to praise the fans of the hometown Laval Rouge et Or. Montreal upset host Laval, the reigning national champion, in the Quebec final.

"All I know is that Quebec has the best fans in the country," Harris said.

"They are very knowledgeable and very passionate about the game, and we love Quebec City for that. They always put on a great show."

"I was thinking about that and was wondering if the game was in Calgary, and Montreal or Laval was playing the Alberta Golden Bears, who would they be rooting for; and I think they would cheer for Alberta. Hopefully the crowd will be on our side, and help us keep the Vanier Cup in Quebec, " said Maciocia.

Calgary is making its 11th visit to the Vanier Cup, winning the big prize for the last time in 1995 (54-24 against Western). Their last Vanier Cup game was in 2016 when they lost 31-26 to the Rouge et Or. The Dinos have four titles in the school's history.

The Dinos are familiar with Quebec, having made six trips to the city in the past 12 years (three Vanier Cups, a national semifinal and two pre-season games). They have lost each time.

However, Dinos' first-year offensive co-ordinator Pat Sheahan has a big win in Quebec under his belt. The former Queen's head coach guided his Gaels to a come-from-behind win over the Dinos in the 2009 Vanier Cup in Quebec.

Meanwhile, Montreal is making their third appearance in the last six years, winning the Cup in 2014 (20-19 over McMaster) before losing 26-23 to UBC the following year.