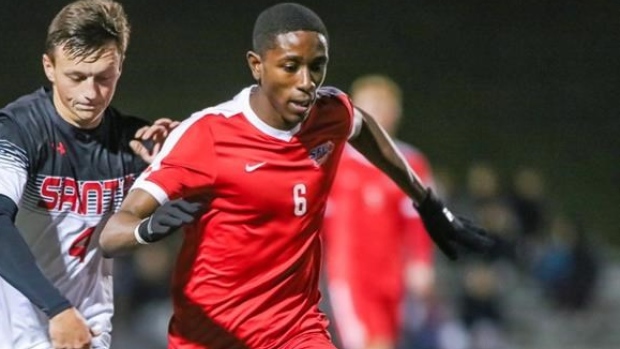 Receiving the ball 40 yards away from goal, the Montreal forward beats five Saint Martin's University defenders and then cooly slots a right-footed shot past the goalkeeper.

It was October 2015 and Camara was a freshman.

Fast forward a little more than three years and Camara was one of six Canadians invited to the MLS Combine to showcase their skills ahead of Friday's MLS SuperDraft in Chicago.

SFU was not Camara's original college destination. When Plan A — Southern New Hampshire University — fell through, he turned to SFU which still had an opening.

Moving to the West Coast proved to be serendipity.

"It really allowed me to establish myself as a man and a footballer as well," Camara said in an interview. "So it was all that I could wish for."

The six-foot-two 175-pounder is coming off a stellar season with the Clan, scoring nine goals and adding 13 assists. The SFU captain was named Great Northwest Athletic Conference player of the year and was selected to the United Soccer Coaches' Division 2 all-America team with SFU teammate Matteo Polisi.

SFU (17-2-0) won its first 16 games of the season, only to see its season end in a 1-0 overtime loss to Cal Poly Pomona in the second round of the NCAA Division 2 tournament.

"We did everything that we had expected and wished for, apart from winning it all," said Camara, an economics and business major.

SFU has history with Cal Poly Pomona, which also knocked it out of the 2016 tournament — that time via penalty shootout.

A midfielder when he arrived in Burnaby, B.C., Camara was shifted to winger. He wasn't comfortable at first but spending the summer of 2016 playing with Whitecaps FC 2 under Alan Koch (now head coach of MLS expansion side FC Cincinnati) added to his confidence.

He shifted to striker as a senior but says he still feels comfortable in the midfield. Camara, a fan of Manchester United midfielder Paul Pogba, sees himself as a playmaker who can also score.

Born in Guinea, Camara moved to Canada with his family when he was four. He played his youth soccer with the Longueuil Soccer Club and Champlain College.

The last SFU player taken in the MLS SuperDraft was striker Jovan Blagojevic, selected by Vancouver in the third round (54th overall) in 2015.