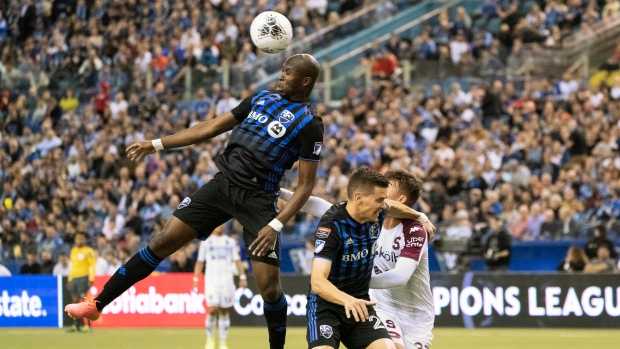 MONTREAL — The Montreal Impact advanced to the quarterfinal of the CONCACAF Champions League with a 0-0 draw against Costa Rica’s Deportivo Saprissa in the second leg of the round of 16 on Wednesday.

The Impact advanced on aggregate, thanks to away goals, after tying the first leg 2-2 in Costa Rica last week.

Clement Diop made two saves for the clean sheet in Thierry Henry’s home coaching debut for the Impact.

Goalkeeper Aaron Cruz made one save for Saprissa, who were eliminated from the tournament. Saprissa are winless in their last 12 road matches in the Champions League.

Montreal will face either the Seattle Sounders of C.D. Olimpia of Honduras in the quarterfinal next month.

As expected, Deportivo Saprissa controlled much of the play as they looked to slowly build from the back and through the midfield. The visitors moved the ball well and dominated possession (60 per cent) but could not pierce Montreal’s five-man back line.

Neither team was willing to take too many chances, especially in the first half, for fear of opening up and making costly mistakes.

Saprissa kept pressing in the second half, desperately looking for a goal. The Costa Rican team sent dangerous crosses into the box but the Impact did well to clear their line time and again.

In the 89th minute, Diop made his best save of the game when he dove left to deny Mariano Torres’ powerful left-footed strike from 25 yards out.

Montreal improved to 9-1-3 all-time at home in the Champions League, including 10 clean sheets.

The 21,505 fans at Olympic Stadium did not have to wait long for any excitement.

It took less than one minute for Bojan to attack Saprissa’s back line on a defensive miscue. But Cruz challenged Bojan and prevented him from shooting.

Johan Venegas came close to giving Saprissa the lead in the 14th minute but his header soared over the bar, into the top netting.

Montreal’s best offensive chance of the game came in the 45th when Romell Quioto squared a ball into the box to Shamit Shome, whose powerful shot from 12 yards out was right on Cruz.

Newly signed centre back Luis Binks made his Impact debut. The 18-year-old replaced Rudy Camacho, who suffered a knee injury in the first leg. Montreal also lost Quioto and Orji Okwonkwo to injuries in the opening leg.

Injuries continued to haunt the Impact in the second leg. Captain Jukka Raitala was hurt in the fifth minute, finished the half but did not return after halftime.

Notes: The Impact started the game with a 5-3-2 formation with Quioto and Bojan up top. … This is the third quarterfinal Champions League appearance for Montreal (previously, 2008 and 2015).

This report by The Canadian Press was first published Feb. 26, 2020.