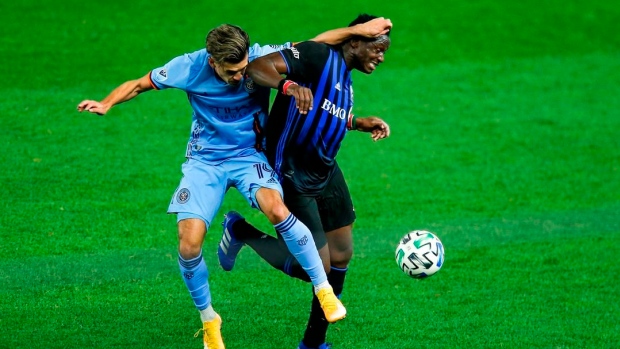 BRONX, N.Y. — The Montreal Impact missed an opportunity to climb upward in the Eastern Conference standings as they hope to secure a place in the MLS playoffs.

New York City FC got goals from three different goal scorers as they defeated the Montreal Impact 3-1 at Yankee Stadium in the Bronx.

Jesus Medina, Maximilliano Morales and Tony Rocha each scored for NYCFC (9-8-3) as they handed Montreal its third loss in its last four games. Romell Quioto scored the Impact's (7-11-2) only goal.

"We could have done better," Impact defender Joel Waterman said. "We fell back into our old habits of giving away cheap goals. New York came out and they had more desire than us and pressed us a little bit more. I thought we battled well and defended well in the first half, but we kind of collapsed with those three quick goals."

NYCFC's victory puts them in fifth place in Major League Soccer's Eastern Conference. The team is a perfect 9-0-0 when they score the first goal of the game.

Montreal's loss will keep the Impact in ninth place in the East. If the Impact had won, they could have potentially risen to seventh place tied with the New York Red Bulls, who drew 2-2 with the Chicago Fire Saturday night. The Impact would have been level on points with 26, but they would have had one more victory than the Red Bulls.

Impact manager Thierry Henry wished his team would have scored earlier in the match while they had the run of play.

"We had to score earlier. We suffered when we were having difficulties again," Henry said.

Impact goalkeeper James Pantemis was put to work as early as the fifth minute of Saturday night's contest as he made a highlight-reel save on a Maximilliano Morales shot. As the Montreal native dove to his right, he was able to deflect the ball out of play with his right hand.

Through 45 minutes of scoreless play, Pantemis had already made four saves.

But his attempt at a clean sheet would be tarnished in the second half after Medina's goal.

NYCFC's Ronald Matarrina ran up the wing and sent a pass through the penalty area. Montreal Impact defender Rudy Camacho got a foot on the ball but couldn't completely clear it from danger. Instead, Medina was first to the ball and put it past Pantemis for his third of the season.

The Impact had a chance to equalize in the 79th minute when forward Romell Quioto made a run up the wing of his own before finding Maxi Urruti near the net. Urruti then tried to one-time the ball past Sean Johnson, but it didn't have enough power to trouble the NYCFC 'keeper.

Morales would later score in the 83rd minute before Rocha would put the home team up three goals with his first-ever MLS goal in the 86th.

Quioto's goal came just before stoppage time, but it was too little, too late for Montreal.

The Impact will be back in action Tuesday night against Nashville SC at the Red Bull Arena in Harrison, N.J.

NOTES: The match went on as scheduled despite a reported positive COVID-19 case by an undisclosed NYCFC player. The team says the player is asymptomatic and in self-isolation.