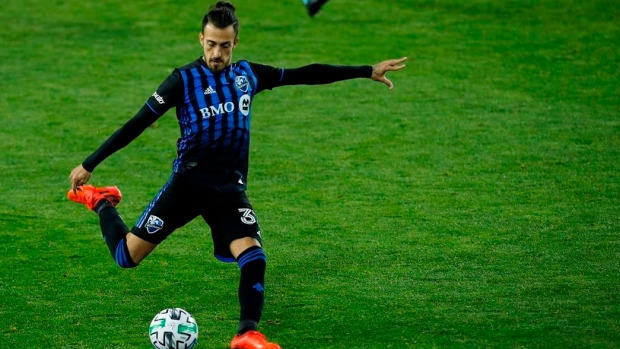 MONTREAL — Romell Quioto feels like he's finally found happiness with the Montreal Impact, so when the opportunity came to cement his future with the club, the star forward jumped on it.

Quioto signed a two-year extension with the Major League Soccer club on Monday. The deal also includes an option for 2023.

"Montreal is very special to (me) because (I) came here after a difficult year, professionally speaking and personally speaking as well, and the club opened the doors for (me). And (I'm) eternally grateful for that," the 29-year-old Honduran forward said through a translator on Monday.

"For (me), the priority is to be happy and for (me) that happiness is here in Montreal and with the Impact.”

Quioto joined Montreal in a trade with the Houston Dynamo late last year.

He was limited to just eight starts and 794 minutes in the 2019 season.

A move to Montreal seems to have reinvigorated Quioto. He led the Impact in scoring, registering eight goals and six assists in 19 appearances.

The Impact finished the regular season with a 8-13-2 record, good for ninth in the East. The club made the playoffs, thanks to a late Quioto goal that sealed a 3-2 win over D.C. United on Nov. 8.

It was the first time since 2016 that Montreal had played in the post-season.

Quioto also scored in the Impact's 2-1 loss the New England Revolution in the opening round of the playoffs.

It was important for the dynamic forward to stay with the Impact, said the club's sporting director, Olivier Renard.

"All year long he has proved his value on the pitch through his performances, but also with his winning and leader mentality," Renard said in a release. "That's the fruit of his labour, now it's up to him to continue that work in order to achieve the club's goals in the years to come."

Quioto feels it was a successful year, both for himself individually and the club as a whole.

"(I) feel good with what (I) gave to the club this season, but (I) feel (I) can give even more," he said. "(I'm) going to work to be able to give everything (I) can to the Montreal Impact, (I'm) here to work and (I'm) already looking forward to the next opportunity to do so.”

Quioto's next chance to contribute on the field will come on Dec. 15 when Montreal faces his former team, Honduran club Olimpia, in CONCACAF Champions League play.

One Impact player who won't be available for the game is forward Maximiliano Urruti.

The club announced Monday that the 29-year-old Argentine international has undergone surgery to repair an injured meniscus in his right knee and will be out for six to eight weeks.

Urruti appeared in 15 games for Montreal this year, tallying five goals and two assists in his second season with the team.

This report by The Canadian Press was first published Nov. 30, 2020.