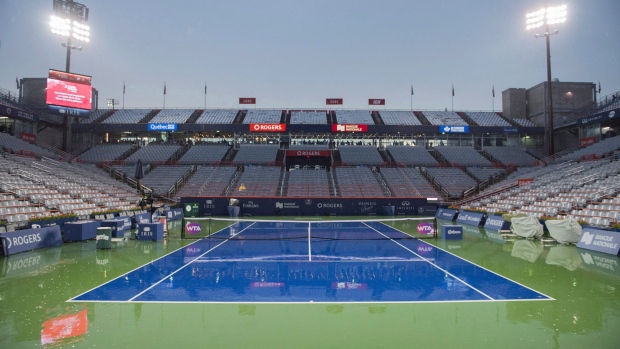 Last year, Bianca Andreescu became the first homegrown winner at the Canadian Open in 50 years. She won’t get a chance to defend that title this year.

On Saturday, the Coupe Rogers, a WTA event set for August 7-16​ in Montreal, was postponed to 2021. The move comes one day after the Quebec government called for all festivals and public sporting and cultural events in the province to be cancelled through Aug. 31 due to the COVID-19 outbreak.

"It's a very sad day," said Tennis Canada president and CEO Michael Downey. "Our Montreal tournament is one of the best in the world and annually entertains and delights more than 200,000 fans. We would've seen Bianca return as the defending champion and we've never had that in our (recent) history so it's really, really sad, but we fully understand why. The health and well being of Canadians has to be front and centre at this time."

The tennis tours have already cancelled events through mid-July, but Montreal is the first tournament to be eliminated from the hard court summer swing.

Tournament director of the @rogerscup Eugene Lapierre spoke with @markhmasters about the difficult decision to postpone this year's event in Montreal until August of 2021 and why the choice was made to hold off the tournament until next year: https://t.co/Eq0hhjgDFL pic.twitter.com/7lodM7hU6m

Canada hosts two big tennis tournaments each summer with the men and women rotating between Montreal and Toronto. The Toronto tournament, scheduled for the same August week, is still on the ATP schedule for now.

"To be frank, we're at risk there too," acknowledged Downey. "We've always thought we would be, because we're just at a time of year that's very difficult especially when you're talking about the success of these tournaments. You have 20,000, 25,000 people on site and that's difficult when the governments are talking about social distancing. We also know that no one really knows what lies in the future with respect to this virus."

The loss of revenue from the two events will present Tennis Canada with a huge challenge not just this season, but for years to come. Downey layed out the issues facing his organization in a Skype interview with TSN on Saturday. The following is an edited transcript of the exchange.

What's the challenge you guys are facing now from an economic standpoint?

"It's severe. You know, to a certain degree we're a one-week wonder. We put on these two magnificent tennis tournaments every August in Toronto and Montreal and they generate by far the lion's share of the profit that we invest in growing the game of tennis coast to coast. With the investment we put in tennis development, the tournaments generate about 94 per cent of that money. We are very self-sufficient, but in this day and age with what's happening now that self-sufficiency has actually made us very, very vulnerable.

"While we get support from the government from Sport Canada and Own the Podium, and we appreciate that support, it is only six per cent of the investment we put into tennis development. So, there's no doubt this year is going to be very difficult. We've already cut most of the tennis development programming for the balance of the year.

"Over the next few months it's easier, because we don't want people playing tennis, they shouldn’t be out playing tennis right now. So it’s easier to cut in the short term, but given the impact already with the loss of one of these tournaments, we're going to have to cut more tennis development for the rest of the year. And, quite frankly, we're going to have to restructure our organization and our staff knows that. We've been very transparent with them with respect to the impact of losing one or both of these tournaments."

How long will it take to recover?

"When you look down the road, because it will be a significant loss this year, into the multi-millions, it won't just impact what we can invest in tennis development this year, it's going to impact what we can invest in 2021 and 2022 and maybe even 2023. We'll be able to make an investment, because these tournaments will come back next year stronger than ever, but we won't be able to afford to invest at the level that we've historically been able to because we have to actually get that money back. That's just the nature of business. If you lose a significant amount of money in one year you've actually got to get yourself out of that hole in the following years."

You mentioned millions of dollars, how much will be lost if both big events are cancelled?

"I will say it’s significant. It is north of $10-million. These are very, very successful tournaments and you can imagine if you lose that level of profitability and you really make it all in that one week, it's a really significant situation that we will have to undertake. But we're a good organization. We have good staff. We have a great sport. We expect to get more government support down the road. Not right now, because the government is doing what they have to do and that's focusing on the health and well-being of Canadians and making sure Canadians are employed, but later this year we think there will be an opportunity for us to make a case for greater support, because the sport deserves it and we've been self-reliant for decades."

Canada has a lot of great young players. Can they mitigate the situation and help get things revved up again when that time comes?

"Absolutely. The sport will live through this financial pain, because the Canadian players are so darn good. Bianca, Felix (Auger-Aliassime), Denis (Shapovalov), Milos (Raonic), Vasek (Pospisil), Gaby (Dabrowski), Leylah (Annie Fernandez), we are a very, very strong sport in respect to what these players can do once the tours come back. They will continue to inspire, there's no doubt about that. I also think they'll give us a lot of confidence to say, 'We want to protect the system that, one way or another, did help them.' At the end of the day, those players go out and hit a ball themselves, but they have had some support, through the years, and one of the things that will be important is protecting this high performance program that was developed back in 2006 and 2007, because we believe in it and believe it can help create other great champions that Canada can take pride in, cheer for and be inspired by."

Inside the rise of 🇨🇦 @leylahfernandez

The 5-foot-4 dynamo from Laval, Que. loves proving people wrong ... & the 17-year-old is just getting startedhttps://t.co/ZspMThIlCK

Are you guys looking at creative ways to restructure things or is it pretty obvious what you have to do, because of the economic reality?

"We're looking at all options but, at the end of the day, we're in a situation where we don't have much choice and our staff knows that. As I said, we've been very transparent and they know the significance of Coupe Rogers and the Rogers Cup and they know the significance of the profitability that comes from those two tournaments and how we invest it. It hasn't been a difficult communication plan, it's just a very unfortunate situation. Like any business, when you have some level of financial turmoil you've got to restructure, you got to look to the future and we have to do it like any other business and they understand that. It will be a sad day when we move forward on this, but like any business you got to do this."