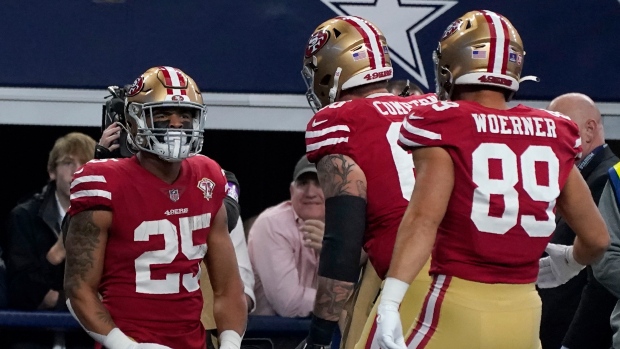 We are less than 24 hours away from what many football fans consider the best weekend of the NFL season.

On Saturday, the Tennessee Titans will host the Cincinnati Bengals in the NFL divisional round opener, followed by the Green Bay Packers and the San Francisco 49ers in the night game.

Then on Sunday, the Tampa Bay Buccaneers host the Los Angeles Rams, followed by the main event of the weekend, when the Buffalo Bills visit the Kansas City Chiefs.

While the Packers remain the Super Bowl favourite, the Chiefs and the Bills are the second and third choices respectively to win it all, highlighting what the oddsmakers think of the importance of that Sunday night game.

Meanwhile, Green Bay is the biggest favourite on the board right now, but we did see that number tick down on Thursday after 49ers’ fans got some welcome practice news.

The Packers opened as 4.5-point favourite for Saturday’s game versus San Francisco.

That number climbed all the way to 6 at most spots earlier in the week when it looked like Jimmy Garoppolo might not be able to play because of thumb and shoulder injuries.

However, Garoppolo practised fully on Thursday and is no longer on the team’s injury report.

Head coach Kyle Shanahan made the point after practice that “he looked as good as he did the week before”.

The good news out of 49ers’ practice led to money on San Francisco at +6, which brought the number for that game back down to 5.5.

If you follow me on Twitter, then you know that I bet Green Bay -5.5 on Tuesday, noting that the best-case scenario for the 49ers was that Garoppolo and Bosa would both play hurt in what could be one of the coldest games in NFL history.

That would be the worst-case scenario for me after betting the Packers -5.5, and while I would have obviously preferred to see news that pushed that number the other way, I still feel comfortable on Green Bay at home coming off a bye week.

Matt LaFleur just green-lighted Randall Cobb to play Saturday night vs. the 49ers and said David Bakhtiari will practice today and then they will see how he responds.

However, there is one player prop that I was looking out for that I am more inclined to play in light of the recent news: Elijah Mitchell Over 19.5 Rushing Attempts.

As someone who bet on the Packers, my biggest concern is the 49ers’ rushing attack, and whether the Green Bay defence will be able to hold up over the course of a full game against one of the league’s most creative, disciplined run games.

In his last six games dating back to the regular season, Mitchell has averaged 24.2 rush attempts and 98.3 rushing yards, including 27 carries for 96 yards in last week’s win over the Dallas Cowboys.

With the extreme cold and Garoppolo dealing with multiple injuries, Kyle Shanahan and the San Francisco coaching staff is going to want to run the football early and often, which is something we saw last week when Mitchell had 15 rushing attempts in the first half versus the Cowboys.

The Packers ranked 16th in yards allowed per carry (4.28) to running backs this season, and that’s despite facing the third-fewest rushing attempts per game.

I had already made a note to myself to look for Mitchell’s rushing attempts prop heading into the week.

Additionally, the fact that I’m on Green Bay -5.5 actually makes me more inclined to play this prop.

I still believe that Mitchell can go over 19.5 rushing attempts in a San Francisco loss.

However, I’m even more confident that he will go over 19.5 rushing attempts in a 49ers’ win or a close game that is decided in the fourth quarter or overtime.

You can find all my plays for the NFL Divisional Round at @DomPadulaEDGE on Twitter.

The Florida Panthers blanked the Oilers 6-0, marking the third time during Edmonton’s slide that they’ve allowed six goals or more.

BY THE NUMBERS: @SportsCentre takes a closer look at Edmonton's tailspin - https://t.co/rgv3Zk9BXF#TSNHockey pic.twitter.com/sExbspBcTL

The Oilers closed as a +130 underdog, which is the longest odds they’ve had for a home game with Connor McDavid in the lineup since February of 2020.

All eyes are on Edmonton in anticipation of any changes that could happen before the Oilers host the rival Calgary Flames on Saturday night.

For those wondering, the Oilers are now +100 to make the playoffs and -130 to miss the playoffs.

NHL favourites went 8-1 overall on Thursday night, with the Columbus Blue Jackets pulling off the lone upset with a 2-1 win over the Philadelphia Flyers as a +100 underdog.

The Flyers have now lost 10 in a row.

The Indiana Pacers stunned the Golden State Warriors 121-117 in overtime on Thursday night.

Indiana was a 16.5-point underdog and +900 on the money line with Domantas Sabonis and Myles Turner sidelined.

It was the second major upset in as many nights after the Houston Rockets took down the Utah Jazz as a 14-point underdog.

The Warriors are 3-6 SU in their last nine games combined.