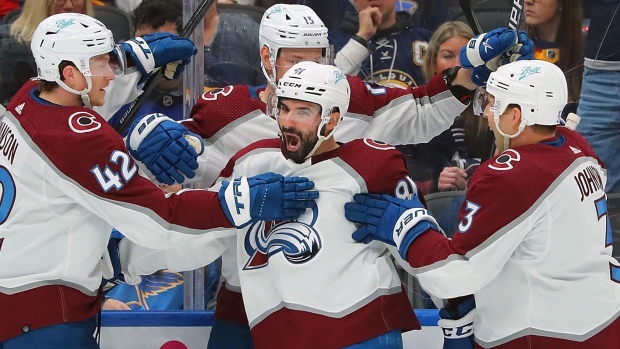 Nazem Kadri returned from injury to play in the Stanley Cup Final for the first time in his career last night.

It was an unforgettable debut.

It was Colorado’s ninth comeback win of the Stanley Cup Playoffs, which is one shy of matching the all-time record for the most in a single postseason.

It wasn’t without a little controversy, either.

It took a few moments for Kadri and almost everybody else that was watching Game 4 to realize that he has scored the overtime winner.

It took a lot longer than that to realize that the Avalanche had six skaters on the ice when Kadri scored the goal.

It wasn’t until Lightning head coach Jon Cooper took the podium to deliver his post-game remarks that I even realized there was an issue with the winner.

"My heart breaks for the players because we probably still should be playing.”

Kadri to score and Colorado to win was +370.

Nazem Kadri became the ninth player in NHL history to score an overtime goal in his #StanleyCup Final debut (and first to do so in a contest that wasn’t Game 1).#NHLStats: https://t.co/UYiVo35xxc pic.twitter.com/x2NRJNIpMS

Entering Game 4, Tampa Bay had not allowed a 5-on-5 goal on home ice since Game 6 of the first round against the Toronto Maple Leafs.

They gave up two at 5-on-5 last night, although I guess technically it was 6-on-5 when Kadri scored the winner.

IT'S A #StanleyCup PICTURE PERFECT MOMENT

Trailing 2-1 in the third period, Andrew Cogliano tied it for the Avalanche at 5-on-5.

Earlier in the game, Nathan MacKinnon ended his Stanley Cup Final goal drought with a power play marker for Colorado’s first of the night.

Nathan MacKinnon scored his first goal of the 2022 #StanleyCup Final and joined some elite company with his 40th career postseason marker.#NHLStats: https://t.co/UYiVo35xxc pic.twitter.com/Zd8LAa4o4A

MacKinnon to score and the Avalanche to win was +320.

Looking at the updated Stanley Cup winner odds at FanDuel this morning, Colorado is now -1250 to win it all.

That number represents a 92.6 per cent implied probability.

I’ll be in the building on Friday.

The Avalanche are -166 to clinch the Stanley Cup on home ice in Game 5 on Friday night.

As somebody that was sitting on a futures ticket with Colorado to beat Tampa Bay as the exact Stanley Cup outcome at +4700, I never thought about hedging at any point and I’m glad that I didn’t now.

The Lightning are 3-0 when facing elimination in the playoffs over the past three seasons, but they never had to overcome a 3-1 series deficit, and the best team in hockey has them on the ropes heading into Game 5.

We are only hours away from the 2022 NBA Draft.

Unfortunately for me, I had to redo this entire section after the following tweet:

As team boards finalize today, the 1-2-3 of the NBA Draft is increasingly firm, per sources: Jabari Smith to Orlando, Chet Holmgren to Oklahoma City and Paolo Banchero to Houston.

Auburn’s Jabari Smith, who was the heavy favourite to go first overall at FanDuel just 24 hours ago at -260, was +125 to go No. 1 early this morning before Adrian Wojnarowski’s tweet.

Duke’s Paolo Banchero, who was +260 to go first overall yesterday, was the favourite to go No. 1 at -210 early this morning before that tweet.

Gonzaga’s Chet Holmgren was the third choice to go No. 1 at +1100 this morning at FanDuel.

At the time that I initially submitted this article, the odds to go first overall in the NBA Draft were off the board at most sportsbooks, including FanDuel.

Odds to be the No. 1 pick in the NBA draft are off the board at several sportsbooks. Odds have moved wildly in the last 24 hours, with Paolo Banchero overtaking Jabari Smith Jr. as the favorite to go No. 1, before books took down the odds.

When I check in again on FanDuel, the odds to go first overall were back up with Smith at -10000 and Banchero at +900.

If the past 24 hours are any indication, those odds will continue to move in the coming hours.

Meanwhile, Canadians Bennedict Mathurin and Shaedon Sharpe are both expected to go in the top-10 tonight.

His draft position over/under at FanDuel is currently 6.5, and it’s juiced to the under at -420 this morning.

His draft position over/under at FanDuel is currently 7.5 - juiced to the over at -174.

Week 3 of the CFL season kicks off tonight on TSN.

The Saskatchewan Roughriders opened as a three-point favourite for tonight’s game against the Montreal Alouettes at FanDuel.

We’re just over 24 hours away from the start of Week 3 in the CFL!@FarhanLaljiTSN, @realEricCohen, @drewfmorrison join @DomPadulaEDGE to set the stage for this week’s action!https://t.co/af3qo0gKNr

I’ll be back on Twitter Spaces just after noon today with Eric Cohen, Davis Sanchez and Aaron Korolnek to talk best bets for Week 3.

Make sure you give us a follow @TSN_EDGE and tune in at 12:30 PM ET for our final show before kick-off.