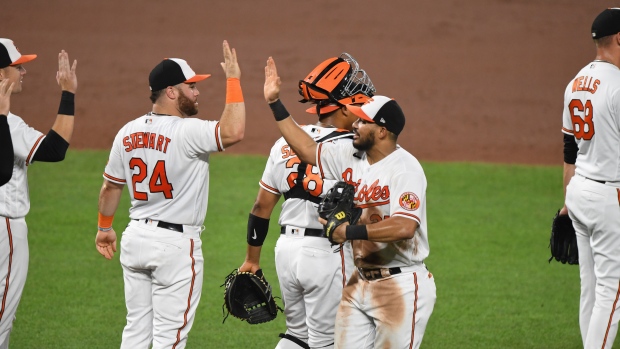 The Baltimore Orioles had lost 19 in a row entering play Wednesday night.

Only two losses away from tying the record for the longest losing streak since 1900, the Orioles had to face Shohei Ohtani, who entered last night’s start with a 5-0 record and a 1.58 ERA since July 1.

It appeared as though the odds were stacked against them. The sharp money certainly was.

Unlike the previous night, when Baltimore was bet down from +130 to +110 ahead of a 14-8 loss, the money piled up on the Los Angeles Angels ahead of first pitch on Wednesday night.

The Orioles ended their historic skid with a 10-6 win over the Angels on Wednesday night.

Their social media team was on fire.

We end the night with an important message: pic.twitter.com/tywRCqFxed

Baltimore’s slide will go down as the seventh-longest losing streak since 1900.

They were +190 on the money line at first pitch.

If only bettors had known about the cleanse that took place in the dugout earlier in the day.

3:45 PM - @TreyMancini and @AustinWynns cleanse the dugout energy with sage.

The Orioles got to Ohtani with back-to-back home runs in the first inning.

After jumping out to a 2-0 lead, Baltimore was actually a -130 live favourite heading into the top of the second.

The Angels responded with six straight runs, before Ohtani gave up a two-run home run in the bottom of the fourth.

The Orioles cut the deficit to 6-5 in the seventh, before getting to the Angels bullpen for five runs in the bottom of the eighth to blow the game wide open.

We did it, y'all. pic.twitter.com/Ewweelq6J3

Baltimore had scored more than four runs only twice over the course of the first 18 losses during their slide.

After scoring eight in Tuesday night’s loss to L.A., they exploded for 10 runs on Wednesday night, their highest output since a 13-3 win over the Houston Astros all the way back on June 29.

Shaking and crying a little. pic.twitter.com/bf1HQX8Z4v

The Orioles will host the Angels in the rubber match tonight before welcoming the Tampa Bay Rays to town for a three-game set beginning on Friday.

L.A. opened at -130 on the money line for tonight’s game, with Jaime Barria scheduled to start for the Angels opposite Keegan Akin for Baltimore.

The losing streak might be over, but Baltimore will remain a smart team to fade the rest of the way.

I’ll likely pass on the Angels tonight and wait for the Rays to show up at Camden Yards for the weekend set.

IT'S OVER! @Dodgers win!!! pic.twitter.com/epQr2Y9arV

The Dodgers pulled ahead 3-1 in the top of the 14th, only for Fernando Tatis Jr. to hit a two-run home run in the bottom half to tie it 3-3.

A two-run home run from A.J. Pollock in the 15th held up as the difference.

Six runs in extra innings and the total landed on eight. It might not be a bad beat, but if you bet the under you were left shaking your head.

The game clocked in at more than five-and-a-half hours.

It was the first game that went beyond the 13th inning since Major League Baseball instituted the runner-on-second start to extra innings in 2020.

In the end, the Dodgers won to improve to 17-4 in the month of August.

Meanwhile, the Padres have lost three in a row and 11 of their last 13 overall.

Sticking with the totals, the Minnesota Twins led the Boston Red Sox 4-2 in the bottom of the ninth.

Kyle Schwarber tied it with a two-run home run to force extras.

The two teams combined for seven runs in the 10th to push the total over in a 9-6 win for the Twins.

Ray has held opponents to two earned runs or fewer in six straight starts, lowering his ERA from 3.12 to 2.72 over that span.

Robbie Ray's 14 strikeouts last night were the most by a left-handed pitcher in Blue Jays franchise history.

It was also the most by a left-handed pitcher on any team this season. pic.twitter.com/Gnmg1gyeHg

Toronto is just 3-3 over those last six starts. However, the under is 6-0 over that span.

After last night’s win, Ray’s odds to win the American League Cy Young shortened from +1200 to +700.

The BMW Championship gets underway this morning from the Caves Valley Golf Club in Owing Mills, Md.

The second leg of the FedEx Cup Playoffs will feature the top 70 players on the PGA Tour.

After a lengthy and entertaining finish to the first FedEx Cup event, the best in the world are headed to the Caves Valley Golf Club for the BMW Championship this week. @houndogharrison has our First Look At The Field. https://t.co/NT4m2P6LAE #BMWCHAMPS pic.twitter.com/6pctXOcELu

With so few players in this week’s field that have experience at this course, it’s that much more difficult to forecast how this week’s event will play out.

Fortunately, we can rely on our experts, including the guys from Golf Talk Canada, who revealed their best bets to win the BMW Championship on Wednesday.

.@TSN_Edge: Who are the favourites at the BMW Championship?