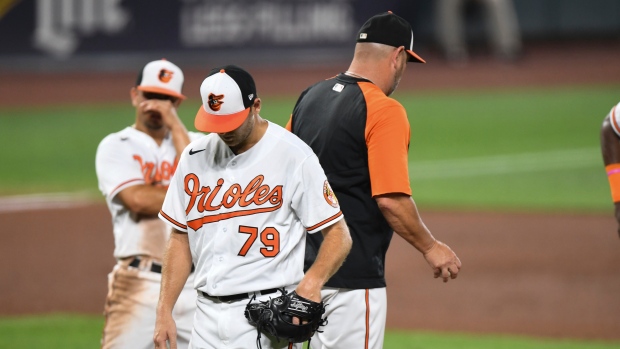 The Los Angeles Angels closed at -125 to beat the Baltimore Orioles on Tuesday night.

It was the most surprising number I’ve seen betting on baseball this season.

The Orioles had lost 18 in a row. Somehow, the sharp money was on Baltimore.

The Angels beat the Orioles 14-8, pushing Baltimore’s losing streak to 19 games in a row.

Per ESPN Stats & Info, if a bettor put $100 on Baltimore to lose the first game of their slide and reinvested everything betting against the Orioles in every game during their losing streak, they would be up to $290,843.

Somehow, Baltimore was bet down from +130 to +110 ahead of first pitch last night.

Orioles drop 19th in a row

The Orioles became the first franchise in the divisional era to have multiple 19-game losing streaks.

The O's are the first team to lose 19-straight games in MLB since the Royals in 2005. pic.twitter.com/8XTVyLzqqe

The Ravens and Orioles now each have a 19-game streak

Baltimore will get the Angels at home again tonight in the second of a three-game set.

If the Orioles are going to snap the streak, they will have to do it against Shohei Ohtani, who is scheduled to start for Los Angeles.

Ohtani owns a 1.58 ERA since the All-Star break.

After what happened last night, what are the odds that we see money on Baltimore to beat Ohtani and the Angels tonight?

I’m not counting on it.

While Baltimore is the coldest team in baseball, the New York Yankees are the hottest.

The Yankees beat the Atlanta Braves 5-4 on Tuesday night to push their win streak to 11 in a row.

New York improved to 28-9 since the All-Star break – the best win percentage in the American League over that span.

The last time they finished a season with a win pct that high in games decided by 2 or fewer was 2004 (.676). pic.twitter.com/DyK0ZtKph6

It’s been 50 years since the Yankees won 12 consecutive games.

They’ll get the chance to hit that mark on Thursday night when they visit the Oakland Athletics.

The Athletics have hit a wall of late with four straight losses, falling two games back of the Boston Red Sox for the final AL wild-card spot.

Meanwhile, the Seattle Mariners have won three in a row and seven of 10 to climb with three games of that final wild card.

Jaguars’ Etienne out for the season

Things went from bad to worse for fans of the Jacksonville Jaguars on Tuesday afternoon.

After another ugly performance by their first-team offence in a preseason loss to the New Orleans Saints, the Jaguars found out rookie first-round pick running back Travis Etienne Jr. will likely miss the entire season due to injury.

Sources: #Jaguars 1st round RB Travis Etienne suffered a significant tear, a serious Lisfranc injury that knocks him out for the next several months and potentially the season.

From a fantasy perspective, James Robinson Jr. is locked into the primary running back role, with the potential for Carlos Hyde and Laviska Shenault Jr. to see more touches.

From a betting perspective, I’m still stuck on the Jaguars’ win total. Even when Etienne was healthy, 6.5 wins seemed high.

After watching the offence struggle this preseason and then lose a potentially dynamic dual-threat back in Etienne, I just can’t envision Jacksonville getting to seven wins.

Head coach Urban Meyer is going to need some time to turn this franchise around.

Hopefully, the Jaguars can protect Trevor Lawrence, Etienne will recover fully, and the team can improve enough between now and next season to be ready to take a step forward.

As it stands right now, I’m not sure this team is that much better than the team that went 1-15 last season.