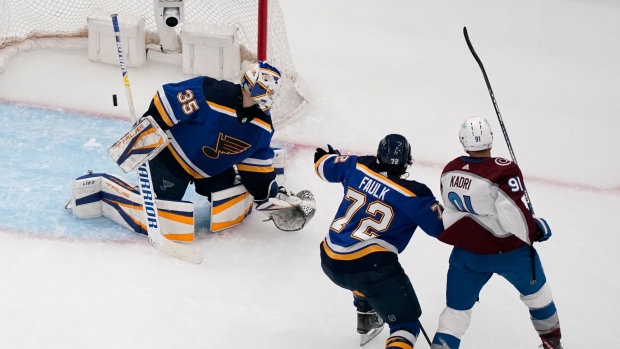 In a Stanley Cup Playoffs that has already been filled with memorable performances, the bar was raised once again last night.

Andrei Vasilevskiy made 49 saves as the Tampa Bay Lightning beat the Florida Panthers 2-0 to complete the four-game series sweep.

It’s the second-most saves in a series-clinching win all-time, behind only Patrick Roy’s 63-save performance in a triple-overtime shutout victory in the 1996 Stanley Cup Final.

Vasilevskiy’s six series-clinching shutouts are the most in NHL history.

Shortly after that, Nazem Kadri scored his first career playoff hat trick and fell one point shy of the franchise record for most points in a playoff game as the Colorado Avalanche beat the St. Louis Blues 5-3 to take a 3-1 series lead.

“For those who hate, that was for them,” was Kadri’s response following the game.

After everything Kadri had to deal with over the previous 48 hours, that was a remarkable performance that is going to be talked about for a very long time.

The Blues repeatedly made an effort to get after Kadri throughout the first 20 minutes of Game 4.

In the end, he absolutely burned them with his play.

Trailing 1-0 in the second period, Erik Johnson, Kadri and Devon Toews combined for three goals less than two minutes apart to give Colorado a 3-1 lead.

After drawing a pair of penalties on Pavel Buchnevich and David Perron, Kadri went to work again with his second of the night to make it 4-1 for the Avalanche.

Perron and Buchnevich responded with power-play goals to cut the deficit to one entering the third period, where it was Kadri that delivered for Colorado once again.

With three goals and an assist, Kadri fell one point shy of matching the franchise record for points in a playoff game.

"For those who hate, that was for them."

Nazem Kadri spoke to the panel about his performance tonight in St. Louis and dealing with the threats he received after Game 3 pic.twitter.com/w88yIGm7Yf

He joined Nathan MacKinnon as the only Avs that have recorded hat tricks in playoff games since 1998, and both of them did it against the Blues.

Colorado improved to 4-0 straight up and on the puck line on the road so far this postseason.

The Avs are now 4-0 on the road in the playoffs and are the only remaining team without an away loss 👀 pic.twitter.com/rgcuRNjFyd

With the win, the Avalanche went from -800 to -4000 to win the series at FanDuel Sportsbook.

Colorado is -235 to clinch its spot in the Western Conference Finals with a win in Game 5 on Wednesday night.

Vasilevskiy Shuts The Door On Panthers

Where does Vasilevskiy rank among the elite goaltenders in the history of the Stanley Cup Playoffs?

I was asking myself that question last night after watching him deliver another marquee performance.

Andrei Vasilevskiy stopped all 49 shots he faced as the Lightning (-126 ML) beat the Panthers 2-0 to complete the four-game sweep of their second round series.

Vasilevskiy made 49 saves to send the Presidents’ Trophy winner home.

He was +1100 to record a shutout at FanDuel Sportsbook.

In his last seven series-clinching games, Vasilevskiy has stopped 199 of the 200 shots he’s faced to go 7-0 with six shutouts.

He gave up three goals in the entire series.

The Lightning cruise to the Eastern Conference Final pic.twitter.com/RR0pJQqBJv

Tampa Bay, which could be found as high as +2200 to win the Stanley Cup at FanDuel Sportsbook after going down 3-2 to the Toronto Maple Leafs in the first round, is now the second choice to win it all at +240.

Only the Avalanche have shorter odds to win it all at +150.

The Lightning will play either the Carolina Hurricanes or the New York Rangers in the Eastern Conference Finals.

With Tampa Bay and Colorado taking care of business last night, favourites are now 42-23 straight up so far in the Stanley Cup Playoffs.

Best Bets For Round 4 Of The Battle Of Alberta

Round 4 of The Battle of Alberta goes tonight in Edmonton.

After looking outmatched by the Calgary Flames in the opener, the Oilers have won each of the last two games to take a 2-1 series lead.

“Connor McDavid’s been great on the ice, but what are the #Flames doing when he’s not on the ice?”@CraigJButton on how all hands have been on deck for the Oilers, while the same can't be said for Calgary: https://t.co/RYyQsmasBB#TSNHockey | #StanleyCup pic.twitter.com/aZg4r84Ml6

FanDuel has Edmonton at -188 to win the series this morning.

Calgary is +155 to win three of the next four and advance.

The Oilers are a small favourite for tonight’s game at -112.

Connor McDavid leads the league with 23 points over 10 playoff games this postseason…@PierreVLeBrun & @TSNRyanRishaug talk about his dominance against the #Flames and how he's getting a lot of offensive support behind him: https://t.co/gL3aacKIjj#TSNHockey | #StanleyCup pic.twitter.com/nrlSj2pyqd

Meanwhile, the total currently sits at 6.5 and it’s juiced to the under at -114.

In terms of a best bets for tonight’s game, I’ll jump back on Matthew Tkachuk’s player prop for the fourth game in a row and take him to go over 3 shots on goal at +116.

Tkachuk had six shots on goal in Game 3 and has recorded 3+ shots in three of his last four dating back to Game 7 against the Dallas Stars in the first round.

Tkachuk getting real with it.

Can the Flames find a way to stop McDavid? pic.twitter.com/8hpZwsbWg4

The Flames have scored 3+ goals in four of their last five meetings with the Oilers dating back to the regular season.

After a flat performance in Game 3 in which they looked very tentative, desperation should lead to a more inspired performance from Calgary tonight.

Celtics Blowout Heat To Even Series At 2-2

Boston improved to 5-0 straight up following a loss this postseason.

Biggest lead each game this series:

The Celtics have outscored their opponents by 17.8 points per game in those five victories.

Looking at FanDuel’s adjusted series prices, Boston went from +105 to -155 to advance to the NBA Finals after the win.

The Celtics are 5-0 following a loss this postseason and Jayson Tatum is driving the offense in those games.

He is averaging 32.6 points following a loss this postseason, the most in a single postseason in Celtics history (min. 5 games). pic.twitter.com/XK27vfXwMk

The Celtics are currently -1.5 for Game 5 on Wednesday night.