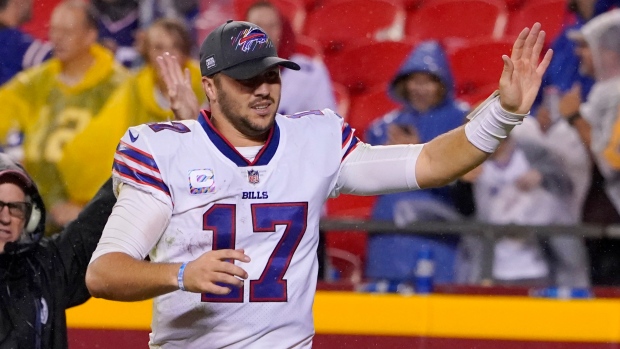 There’s a new team to beat at the top of the AFC.

While Sunday Night Football took a little longer than we all wanted to wait, the final result led to a shift at the top of the AFC futures market.

The Buffalo Bills opened the regular season at +600 to win the AFC Championship.

After a 38-20 win over the Kansas City Chiefs on Sunday night, the Bills are now +250 to reach the Super Bowl.

If you tuned in looking for an edge, it didn’t take long to realize that Buffalo was the better team.

As it turned out, the #HammerHalftime hashtag was last call to jump on the Bills live, as they went on a 24-3 run over a 16-minute span of game time in the middle quarters to pull away for good.

If there was any doubt about where Buffalo ranks among the AFC’s best, a double-digit win over Patrick Mahomes in his own building in prime time was a good way to send a message.

The Bills dominated the Chiefs on both sides of the football, reaching the 35-point mark for the fourth straight game while holding Kansas City to 13 points until the game was out hand in the fourth quarter.

The only reprieve for the Chiefs was an hour-long delay due to lightning in the area.

Josh Allen threw for 315 yards and three touchdowns, with 59 rushing yards and a rushing score.

It was the first time in Mahomes’ NFL career that the opposing quarterback had more passing yards, passing touchdowns and rushing touchdowns in a game.

The 18-point loss was also the largest at home for Mahomes in his career.

Buffalo cruised to the win as a +125 money line underdog.

The cameraman obviously had the Bills plus 2.5 points. pic.twitter.com/sdTHxpqRvc

If you haven’t set your alerts, our NFL analyst Davis Sanchez improved to 9-0 with his Hammer Halftime segment.

That record includes getting the Bills at -3 live in the second quarter.

The Bills are simply on another level right now.

The Chiefs are still the second choice to win the AFC Championship, which brings me to the next thing that caught my eye in the AFC futures market.

While the Bills got the bump at the top following the head-to-head win over Kansas City, there’s another AFC contender that’s still being overlooked.

Justin Herbert threw for 398 yards and four touchdowns to lead the Los Angeles Chargers (-2.5) to a 47-42 win over the Cleveland Browns.

He also had a rushing touchdown.

Justin Herbert went IN to help the Chargers beat the Browns 🔥 pic.twitter.com/NPECODh2eb

It was his seventh career game with three touchdown passes and zero interceptions, which is the most by any player in NFL history through their first two seasons.

Maybe Justin Herbert is the NFL’s new QB1.. Not a hot take.. Just look at how he plays.. #NFL

The Chargers trailed by as many as 14 points, making it their largest comeback win since 2018.

LA improved to 4-1 with quality wins over the Chiefs and Browns.

The Browns made NFL history ... and still lost to the Chargers 🤯 pic.twitter.com/GY5kIpsWht

Still, the Chargers have the same or longer odds to win the AFC Championship than both of those teams this morning.

As far as I’m concerned, the Chargers and Bills are the two best teams in the AFC right now.

Now that we have seen a significant shift at the top, it will be interesting to see how things play out this season.

Performance Of The Week

While Allen and Herbert could certainly get the nod here, I’ll go with Tom Brady as the top performer of the week.

Brady threw for 411 yards and five touchdowns in a 45-17 win over the Miami Dolphins.

I remember co-workers telling me he was done when I started in this industry.

Believe it or not, it was Brady’s first career game with 400 pass yards and five touchdown passes.

Upset Of The Week

NFL favourites have dominated so far in Week 5, going 11-4 straight up and 9-6 against the spread.

The Chicago Bears upset the Las Vegas Raiders 20-9 as a +200 money line underdog.

Meanwhile, the Bills closed as a +125 money line underdog for their win over Kansas City.

The Philadelphia Eagles beat the Carolina Panthers 21-18 as a +120 money line underdog.