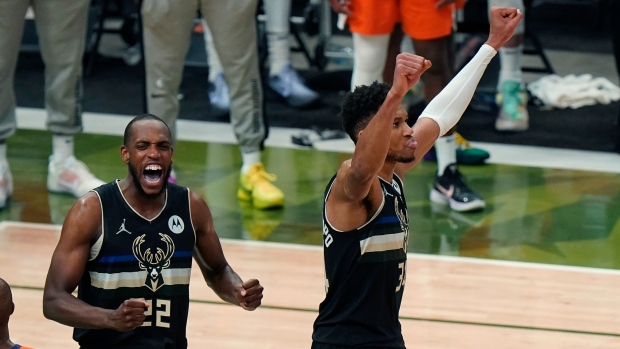 The Milwaukee Bucks are the 2021 NBA champions.

It’s Milwaukee’s first title since 1971. The 49 seasons between championships is the most in NBA history.

The Bucks opened the regular season at +550 to win the NBA championship.

After dropping the first two games of the NBA Finals, Milwaukee was +400 to win the title.

The Milwaukee Bucks are NBA Champions! The Bucks (-4.5) win and cover with the 105-98 win over the Suns in Game 6 of the NBA Finals. Home teams with a chance to clinch the title in Game 6 are now 11-1 since the merger. https://t.co/vWKRoYBL7W #FearTheDeer pic.twitter.com/k1ZR9iCHcP

There wasn’t much from those first two losses that indicated the Bucks had what it takes to rally from a 2-0 series deficit. After all, teams that led 2-0 in the NBA Finals had gone on to win the championship 31 out of 35 times.

The Suns headed to Milwaukee needing only a split in order to get two chances to clinch the title on their home floor. Instead, the Bucks won the next two games at Fiserv Forum to send the series back to Phoenix tied 2-2.

Even as the series shifted back to Arizona, the Suns were the betting favourite to win the title.

However, led by arguably the best player in the world and armed with a renewed sense of confidence that trickled throughout the entire lineup, the Bucks had their best in front of them.

The Greek Freak punctuated one of the most impressive NBA Finals performances ever with 50 points, 14 rebounds and five blocks.

According to @EliasSports over the last 50 years, only 2 players have scored 33 points in a half of a Finals game: Giannis and Michael Jordan. pic.twitter.com/XIkQhmopcf

The supporting cast picked up the pace around him as well, with Khris Middleton and Jrue Holiday stepping up to complement Antetokounmpo’s greatness.

The Bucks dominated the Suns on the boards and in transition.

They were able to weather everything that Phoenix threw at them and respond with an even more impactful counterpunch.

Milwaukee won and covered in four straight games to become just the fifth team in NBA history to win the title after going down 2-0 in the Finals.

In a season in which one narrative after the other was smashed, the Bucks delivered the biggest statement at all with their superstar forward leading the way.

Antetokounmpo was +375 to win NBA Finals MVP entering the series.

Even after leading Milwaukee to back-to-back wins in Games 3 and 4, there were some that didn’t consider him a lock to win Finals MVP if the Bucks ultimately prevailed.

Middleton scored 40 in Game 4 and as always there were whispers about Milwaukee’s second choice to win the award as a potential value play.

By the time the final buzzer went on Tuesday night, there was no doubt about who would win MVP.

The Suns had no answer for Giannis throughout the entire Finals.

Antetokounmpo punctuated a remarkable series by dropping 50 with five blocks in Game 6.

With the award, he joined Hakeem Olajuwon and Michael Jordan as the only players in NBA history to win a MVP, Finals MVP and Defensive Player of the Year.

He also became just the third player in NBA history to win multiple MVPs and a Finals MVP before turning 27.

Giannis Antetokounmpo's 211 total points in the series are tied for third most in an NBA Finals debut behind Rick Barry (245) and Jerry West (218).

The #NBAFinals Data Day blog comes to a close along with a series that unlocked the MVP's legend status:

At 26 years old, Antetokounmpo is entering the prime of his career. After clinching his first title and Finals MVP, I can’t wait to see what the Greek Freak has in store next.

While they couldn’t close in the Finals, the Suns still enjoyed one of the most impressive turnarounds in NBA history.

Phoenix had missed the playoffs in 10 straight seasons – the second-longest active postseason drought at the time.

They beat out the Los Angeles Lakers and Los Angeles Clippers as a 20-to-1 long shot to win the Pacific Division.

After beating the Lakers as an underdog in the opening round, Phoenix had little trouble closing out both the Denver Nuggets and the Clippers to win the West at 22-to-1 odds.

Looking forward to next season, oddsmakers are giving the Suns a lot more respect after what they accomplished this season.

Here is our first look at the 2022 NBA title odds. The Bucks are +900 to repeat as NBA champions - the third choice on the board behind the Nets and the Lakers. #FearTheDeer #NBAFinals pic.twitter.com/nds5LNC5o4

Chris Paul is 36, and it showed on the floor as the Finals progressed.

Jae Crowder, Cameron Payne and Cameron Johnson are all under contract for next season as well.

If Chris Paul opts out of his contract with the Suns, his first call should be from his best friend LeBron James and the Lakers.

No one will underestimate the Suns heading into the 2022 season.

However, with little wiggle room under the salary cap assuming Paul will be back with the team, it will be a difficult potential road back to the NBA Finals next season.