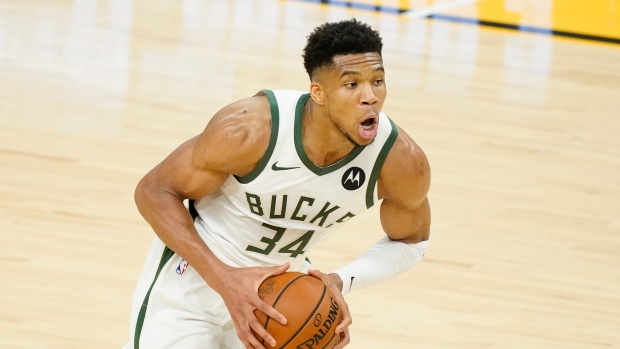 The Milwaukee Bucks were written off by most after losing the first two games of the NBA Finals.

Now they are one win away from clinching a championship.

The Bucks have an opportunity to lift the Larry O’Brien Trophy with a win over the Phoenix Suns in Game 6 at the Fiserv Forum tonight.

Teams that have gone up 3-2 in the NBA Finals have won the series 81 per cent of the time.

All signs point towards Giannis Antetokounmpo and company clinching in front of their home fans in Milwaukee tonight.

The Bucks are the fourth team in NBA Finals history to go down 2-0 and win the next three games. Two of the previous three went on to win the title.

Milwaukee’s 123-119 win over Phoenix in Game 5 marked the first time in the series that either team won as the visitor.

It’s also the first time that either team won as an underdog.

Now the Bucks get a chance to clinch at home, where they are 9-1 this postseason.

Whether it’s their lights-out shooting numbers, transition offence, or second-chance scoring stats, Milwaukee has completely flipped the narrative of the series with three straight wins.

We are less than 24 hours away from Game 6 of the NBA Finals. Milwaukee is currently a five-point favourite (-200 ML) versus Phoenix. The Bucks went from +135 to -400 to win the NBA championship following their Game 5 win. #NBAFinals https://t.co/uGE5Sl6izY pic.twitter.com/cOBMpCKCRv

The Bucks went from +135 to -400 to win the championship following their win in Game 5.

Milwaukee, which opened as a 3.5-point favourite for Games 3 and 4, opened at -5 for Game 6 and that number hasn’t moved.

The Suns’ inability to respond on their home floor in Game 5 makes it that much more difficult to imagine them figuring out the answer in a building that the Bucks have been at their best in throughout these playoffs.

I’m not about to write off Phoenix now the way that I did Milwaukee after Game 2. Still, I have a tough time envisioning a scenario in which the Suns are able to force a Game 7.

If the Bucks clinch the title tonight, it’s very likely that Giannis will be named NBA Finals MVP.

Antetokounmpo opened the series at +375 to win that award.

At the time, Milwaukee was a championship underdog and there was plenty of uncertainty surrounding his injury status.

Fast-forward a couple of weeks, and Giannis is the overwhelming favourite to win MVP at -400.

After falling behind 2-0 in the NBA Finals, Giannis Antetokounmpo and the Bucks responded with three straight wins. @chengwesley takes a closer look at how Milwaukee's slow start and ensuing resurgence led to a massive swing in the Finals MVP market. https://t.co/uGE5Sl6izY pic.twitter.com/LptYDt65Ki

Coming off his third straight game with at least 26 points, nine rebounds and six assists, Antetokounmpo could become the third player in NBA history to win a league MVP (2), Defensive Player of the Year, an NBA title and a Finals MVP.

The only players to pull off that feat? Michael Jordan and Hakeem Olajuwon.

Khris Middleton has been excellent and I’ve seen some comment that he could be a sleeper pick to win Finals MVP. I’m not buying it.

Antetokounmpo should be a lock to win Finals MVP if the Bucks clinch.

In the afterglow of Collin Morikawa’s brilliant performance at the Open Championship, the PGA Tour heads to TPC Twin Cities for the 3M Open this week.

Dustin Johnson is the betting favourite at +700.

After he called Collin Morikawa’s victory at last week’s Open Championship, Michael Harrison revealed his First Look At The Field for this week’s 3M Open on Monday night.

You can check out who he likes this week below.

Last week, @houndogharrison picked Collin Morikawa to win the Open Championship. Who does he like to contend at the 3M Open this week? Here is his First Look At The Field. https://t.co/VJX4F1Dlee pic.twitter.com/z6vB5hYBEZ