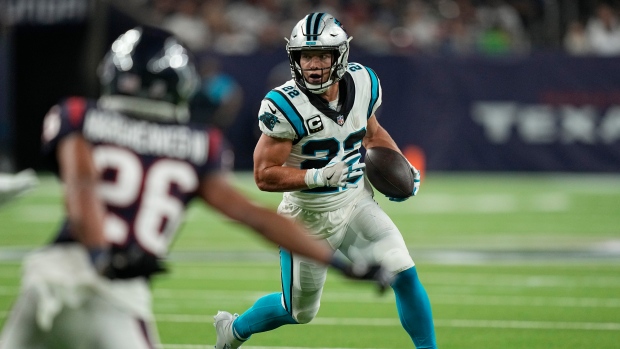 The Carolina Panthers emerged from Thursday Night Football with their perfect record intact.

Unfortunately, they couldn’t escape without some significant losses.

The Panthers (-8.5) beat the Houston Texans to improve to 3-0 straight up and against the spread.

For as impressive as the Panthers’ 3-0 start has been, losing McCaffrey and Horn long-term would be a major blow to the optimism this team has generated early on this season.

Sam Darnold certainly delivered as a touchdown favourite for the first time in his career.

Darnold threw for 304 yards and rushed for two scores in the win.

Darnold finished 9/11 for 198 yards on passes traveling 10+ air yards, completing +24.7% of passes over expected according to our completion probability model, a new career-high.#CARvsHOU | Powered by @awscloud pic.twitter.com/EQ2LTxIVBC

Meanwhile, rookie fourth round pick Chuba Hubbard stepped up with 52 yards on 11 carries. He also had three receptions for 27 yards.

Carolina will need to lean even more on the Canadian running back if McCaffrey is forced to miss an extensive amount of time.

🇨🇦 Chuba Hubbard put in work for the Panthers tonight 💪

The Panthers entered Week 3 as the top-ranked team in the NFL by DVOA.

While they lost some key pieces due to injury, Darnold was solid and the defence showed again why they are considered one of the most improved units in the league.

Next up for Carolina is a Week 4 showdown with the Dallas Cowboys.

The Panthers were +700 to be the league’s last remaining undefeated team entering Week 3.

After last night’s win and a couple of key injuries, I’m interested to see what their number looks like entering Week 4.

For as good as the Toronto Blue Jays have looked in the month of September, they can’t afford to let many more games slip away.

After going 12-1 to start the month, Toronto has gone 4-5 since, including dropping three of its past four.

With the loss, the Blue Jays are now a full game back of the New York Yankees for the second American League wild-card spot.

Toronto’s odds to make the playoffs have lengthened from -215 to -145 after back-to-back losses.

Meanwhile, the Yankees are now -140 to make the playoffs.

Week 8 of the CFL season wraps up tonight with a doubleheader on TSN.

First up, McLeod Bethel-Thompson and the Toronto Argonauts (-2.5) host the Montreal Alouettes.

It will be McLeod Bethel-Thompson getting the start behind-centre tomorrow night for the @TorontoArgos:#CFLhttps://t.co/IrrVZeJRER

After that, the Saskatchewan Roughriders (-110) will visit the BC Lions in the marquee matchup of the week.

The Prop Masters will be back later this afternoon with their best bets for tonight’s game.

Coming off a 6-0 performance on Wednesday, it’s safe to say that I’ll be tailing The Prop Masters again tonight.