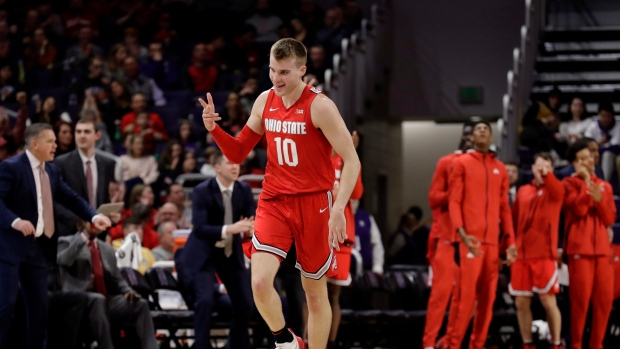 College basketball is back.

As if the sports schedule for this week wasn’t good enough already with the NFL slate on Thursday and college football on Friday, we get a full slate of NCAA college basketball action on Wednesday as the 2020-21 tips off.

Nine months after the NCAA men’s basketball tournament was cancelled, a new season of college hoops is set to tip off tonight.

While we don’t know how this unprecedented season will play out against the backdrop of the current pandemic situation, we can certainly appreciate all of the work and dedication put in to arriving at this point.

TSN has you covered with a full slate of games on the network beginning early this afternoon.

Make sure you check the broadcast schedule for a complete list of the games on our network.

This is one of the best weeks of the NFL season, thanks to a triple-header on American Thanksgiving Thursday.

‘The Big E’ Eric Cohen gave us our first look at the lines for Week 12 in the latest edition of Market Insights.

Meanwhile, our NFL analyst Davis Sanchez is leaning towards the Dallas Cowboys at -2.5 at home against the Washington Football Team on Thursday.

Dallas has struggled in recent Thanksgiving Day games with a 4-5 record, including 1-8 against the spread. However, they have dominated their NFC East rivalry with Washington, winning 11 of their past 15 meetings.

While that line opened at Cowboys -2.5, it’s already at -3 at most spots this morning.

Make sure you check back in on Thursday morning for our best bets for the Thanksgiving Day games.

Week 12 also represents the start of the final stretch of the season as contending teams jockey for playoff position.

While the No. 1 seed in each conference is more important than ever with only one bye available with home-field advantage, there are more teams in the hunt to make the postseason in each conference thanks to the added wild card spot.

In terms of the best of the best, it will be very interesting to see how the battle for the No. 1 seed plays out in both conferences.

Here is how I rank the top five teams in the NFL entering Week 12, with each team’s Super Bowl odds in brackets.

Remember back in September when I said it made sense to take the Chiefs to win the Super Bowl now if you hadn’t already because the odds would never be better? Kansas City is now +300 to win it all – the worst value you would have found them at all season.

Despite an outright loss and a close win in their two meetings with the Las Vegas Raiders, the Chiefs still have Patrick Mahomes and the most explosive offence in the NFL.

If I had to put my money on one team to win it all, it would still be Kansas City.

The Steelers still have the best record in the NFL at 10-0.

If there is one team I would bet on to beat the Chiefs right now it’s Pittsburgh.

While their defence is one of the best in the NFL, the Steelers offence still doesn’t get enough credit.

Diontae Johnson, JuJu Smith-Schuster, Chase Claypool and James Washington make up one of the most impressive wide receiver tandems in the league.

As long as Ben Roethlisberger is healthy, Pittsburgh is a legitimate Super Bowl contender.

The Saints still have one of the most complete rosters in the NFL and a coaching staff that understands how to maximize the potential of the talent on that roster.

A win over the Atlanta Falcons, combined with the Green Bay Packers loss to the Indianapolis Colts, keeps the path to the No. 1 seed in the NFC open for New Orleans.

For as bad as Seattle looked in back-to-back losses to the Buffalo Bills and Los Angeles Rams, I still think we have yet to see the best they have to offer.

Russell Wilson is among the best quarterbacks in the NFL and the schedule gets much easier for the Seahawks the rest of the way.

If Seattle could find a way to get healthy and win the race for that No. 1 seed in the NFC, it could be the difference come playoff time.

I get that the Packers need to figure out how to stop the run. It has been a glaring issue for them all season.

However, even coming off a couple of sloppy games against AFC South opponents, the case for Green Bay is clear.

Aaron Rodgers is playing at an MVP level. There are enough pieces on offence when healthy to compete with the top teams.

If they can figure out how to clean things up on defence with some talented pieces on that side of the football, the Packers can compete with anybody in the NFC.