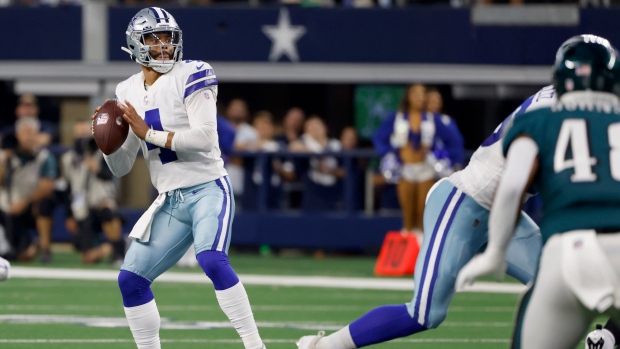 The National Football League has treated me well for the most part early this season.

There are two exceptions.

Player props have been an adventure for me through the first three weeks, with injuries getting in the way far more often than I anticipated.

For example, three of the eight player prop recommendations I tweeted out on Sunday were in anticipated of a big game from New York Giants wide receiver Sterling Shepard, who on paper had a favourable matchup against the Atlanta Falcons defence.

Shepard exited that game in the first quarter with an injury.

While the first exception is just bad injury luck, the second is completely on me.

Heading into this season, I wrote about the importance of coaching and good quarterback play above all else when it comes to betting the NFL.

For the second time this season, I abandoned that strategy and placed a wager for Monday Night Football that I can’t even pretend was the right side.

Fool me twice, shame on me

The Dallas Cowboys had the better quarterback heading into their prime-time showdown with the Philadelphia Eagles.

I’m not going to give them the edge in terms of the coaching staff, but after last night’s game I feel confident calling that category a wash.

I bet on Prescott and an offence that has been impressive early this season when I took the Cowboys in my wins pool. That was the right choice.

On the flip side, I took the points with the Eagles and teased them up to +10.5 thinking that was a big enough cushion for them to cover. That was the wrong choice.

In this situation, I allowed myself to be distracted by trends and outside influences and veered away from the most important aspects of the game.

Road underdogs getting six points or less were a combined 14-2 against the spread entering Monday Night Football.

The Cowboys were 0-5 against the spread as a home favourite since the start of last season, so I took the points with the Eagles in a divisional game.

It was even the same number.

The Bills had the better quarterback and a slight edge in the coaching department, but I took the points with Miami.

In terms of the actual game, full marks to Prescott and the Cowboys for another strong performance.

That’s back-to-back wins over the Los Angeles Chargers and the Eagles to improve to 2-1.

Prescott became the second Dallas quarterback to complete at least 80 per cent of his passes in back-to-back games, joining Troy Aikman (1993).

Let’s also give the Cowboys’ defence the credit it deserves.

The Cowboys opened the season at +150 to win the NFC East.

With a one-game lead over Philadelphia and the Washington Football Team, Dallas is now -185 to win its division.

On the flip side, the Eagles’ odds to win the NFC East have lengthened from +340 to +500 after consecutive losses.

The Eagles called a designed run on 9.4% of their plays on Monday.

That's the 4th-lowest rate in any game over the last 15 seasons. pic.twitter.com/pQmQ2zWW85

The Los Angeles Rams were either a small underdog or a pick’em depending on where you looked this week.

If we call that game a pick’em, NFL favourites went 9-6 straight up and 7-8 against the spread in Week 3.

Toronto, which is currently one game back of the Boston Red Sox for the final American League Wild Card, is currently -180 to make the playoffs.

They are two games back of the Yankees. New York’s odds to make the postseason have shortened from -115 to -525 over the past week.

The Red Sox are currently -225 to make the playoffs.

Toronto is a -135 favourite for tonight’s series opener with Hyun Jin Ryu set to get the start opposite Jameson Taillon.