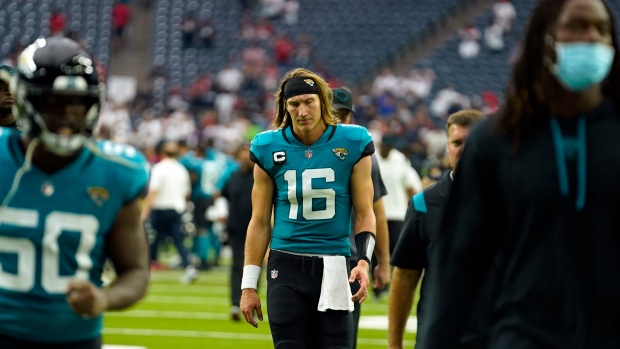 The 2021 NFL rookie quarterback class is regarded as one of the most talented groups in recent years.

But if the first month of the season is any indication, it’s going to take some time before bettors can rely on them.

Fading this year’s rookie quarterbacks has been a profitable approach for bettors in September.

Trevor Lawrence, Zach Wilson, Justin Fields, Mac Jones and Davis Mills are a combined 1-10 straight up and 1-10 against the spread.

Their lone win and cover came from a head-to-head matchup when Jones’ Patriots beat Wilson’s Jets 25-6 in Week 2.

That means that if you blindly bet on veteran quarterbacks against rookies in September, you’d be 10-0 right now.

If you haven’t faded the rookies yet, Thursday Night Football should be another good chance to get started.

Bengals will be a popular teaser pick

The Cincinnati Bengals opened as a 6.5-point favourite against the Jacksonville Jaguars for Thursday Night Football.

That number has since moved to 7.5, and I’m not so sure we don’t see some money on Cincinnati before they kick off tonight on TSN.

The five rookie quarterbacks selected in the first round of the 2021 #NFL Draft are a combined 1-9 straight up and against the spread through Week 3. @DavisSanchez Pumps The Brakes on expectations for those starters in their rookie seasons. https://t.co/nU5djYXMwr pic.twitter.com/2j7usZAQgH

Since 2016, Thursday night home favourites of at least seven points are a combined 13-1-1 against the spread, not including season openers.

Jacksonville has lost 18 straight games outright and is one of four teams that have yet to cover the spread this season.

Some of what’s at stake in tonight’s Jaguars-Bengals game: pic.twitter.com/kmSbPVjmeu

With wins over the Minnesota Vikings and the Pittsburgh Steelers to start the season 2-1, the Bengals should have no problem taking care of business at home against the Jaguars.

Cincinnati should also be a popular teaser play with a chance to tease them down through the key numbers of 7 and 3.

The highest-graded QB from Week 3:

A two-team, seven-point teaser with the Bengals and Buccaneers gets you both teams to win outright at -140.

While I lean towards Cincinnati to cover the 7.5 at home, I’ll lock in the latter tease as my best bet for Thursday Night Football.

Bo Bichette's second home run of the night was the difference as the Blue Jays (-110) beat the Yankees 6-5. https://t.co/GHJ8El34DK pic.twitter.com/7Xk9svi7Lv

Bo Bichette hit two home runs to lead the Toronto Blue Jays (-110) to a 6-5 win over the New York Yankees.

Marcus Semien hit his 44th home run of the season, which is the most ever in a season by a primary second basemen.

Meanwhile, the Seattle Mariners (-120) stayed red hot with a 4-2 win over the Oakland Athletics. It was Seattle’s 12th straight win over Oakland.

After last night’s results, there are four teams separated by a total of two games.

The Yankees are still the front runner, but their betting odds to make the playoffs have shortened from -2000 to -650.

This was fun already. It's getting better. A's are out, so the dream of a five-way tie is gone, but today went a long way toward making this a glorious next four days.

As of this morning, Toronto is a -140 favourite for tonight’s game against the Yankees, with AL Cy Young Award favourite Robbie Ray set to get the start opposite Corey Kluber.

Ray’s odds to win the AL Cy Young shortened to -600 after Gerrit Cole was roughed up by the Blue Jays on Wednesday night.

With a strong performance tonight, Ray could solidify his status as the obvious favourite and help Toronto climb one win closer to qualifying for the playoffs.

We are just over 48 hours away from a marquee SEC showdown between the No. 1 Alabama Crimson Tide and the No. 12 Ole Miss Rebels on Saturday.

Alabama will be ready and motivated for it.

Per ESPN’s Football Power Index, the Crimson Tide are now at 80 per cent chance to reach the SEC Championship game.

Alabama is a +175 co-favourite to win the FBS national championship along with the Georgia Bulldogs.

However, the Crimson Tide have the slight edge to win the SEC Championship at -165, with Georgia at +150.

Meanwhile, Saturday’s battle between Alabama and Ole Miss will feature the top two choices to win the Heisman Trophy in quarterbacks Matt Corral and Bryce Young.

Ole Miss QB Matt Corral has emerged as the consensus betting favourite to win the Heisman Trophy ahead of Saturday's showdown with No. 1 Alabama, when he'll go head-to-head with the second choice to win that award in Crimson Tide QB Bryce Young. #HottyToddy #RollTide pic.twitter.com/GD2RUdgl9D