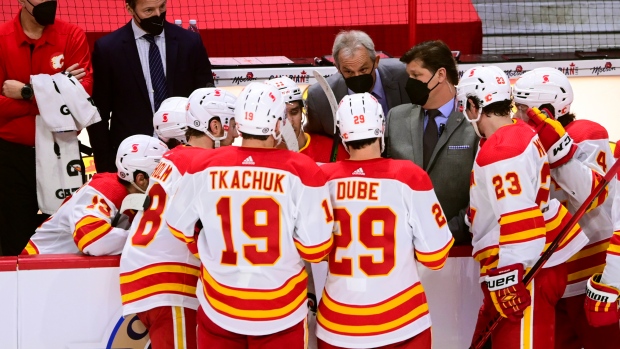 The Calgary Flames are running out of time to make a serious push for a playoff spot.

Four points back of the Montreal Canadiens for the final postseason spot in the North Division, Calgary had an opportunity to close the gap on idle Montreal with a win over the Ottawa Senators on Monday night.

Instead, the Flames dropped a 2-1 decision as a -170 favourite – their fourth loss in six games against the Senators this season.

After three straight wins with Darryl Sutter back behind the bench, Calgary has dropped three of its past four.

It isn’t just Flames fans that are frustrated with their team.

With just one goal in their last two games combined, fantasy managers are growing impatient with the lack of production from their top scorers.

Fantasy GMs had plenty of question marks about the potential ceilings of their players once Sutter took over again in Calgary.

There haven’t been many bright spots at all of late.

It was the Flames’ lone goal in their past two games.

39 days after his last even-strength goal & over 140 minutes since the team's last goal, Johnny Gaudreau ties it up. Seemed like just a matter of time before the Flames would even things up. Ottawa had played very well defensively up to this point.

Gaudreau has just two goals with no assists in seven games since the coaching change.

Sean Monahan had two goals in a 3-1 win over Montreal on March 13 but doesn’t have a point in the five games since.

Sam Bennett, who played 16:28 in Monday night’s loss, is a minus-4 with zero points in his past six.

The lack of five-on-five production is a major issue for the Flames and a concern for fantasy managers heading into trade deadlines unsure of what to do with players like Gaudreau and Monahan.

Downed 2-1 by the Senators earlier tonight, the #Flames offensive woes in 2020-21 were present again- a trend that's been especially bad on the road, where their goals per game rate ranks 4th worst among all NHL teams on this list pic.twitter.com/K2CTbkIlOE

The fact that they have not been able to produce at a high level in games they are expected to, such as Monday night’s loss to Ottawa, is a major concern.

Meanwhile, Senators netminder Filip Gustavsson turned aside 35 of the 36 shots he faced for the win in his first NHL start on Monday night.

Ottawa picked up the win as a +155 underdog.

The rematch between these teams will go on Wednesday night.

It will be interesting to see how the Flames respond knowing that they can’t afford to let many more points slip away.

Fantasy managers will be paying close attention to the box score once again.

The Winnipeg Jets (-130) had no issue scoring with three goals in the third period of a 4-0 win over the Vancouver Canucks on Monday night.

Connor Hellebuyck stopped all 22 shots he faced for the shutout.

Winnipeg is now two points back of the Toronto Maple Leafs for first place in the North Division with the same number of games played.

As I mentioned a few weeks ago, the Jets still aren’t getting much respect from oddsmakers.

Despite the standings, Winnipeg is still +450 to win the North Division compared to -175 odds for Toronto.

The Bulldogs have shot 54.9 per cent from the field this season, which is on pace to be the highest field goal percentage since the 1988-89 Michigan team that won the national title.

The fact that they can still blow out an opponent and cover the spread despite not playing to their potential is a testament to their depth and talent.

After reaching the Sweet 16, oddsmakers have Gonzaga at +150 to win the national title and complete the perfect season – down from +200 to open the tournament.

Does the fact that so many of their top competitors have already lost factor into that outlook?

There has already been 16 instances so far in this tournament in which the lower-seeded team has won, which is tied for the second-most seed upsets prior to the Sweet 16 since teams were first seeded in 1979.

Baylor, Michigan, Houston and Alabama are all still alive.

Still, the Zags won’t have to face any of those teams until the Final Four at the earliest and that’s only if those teams can even make it that far.

As I wrote before the tournament started, if you’re looking for value betting on a national title winner you’re going to have a tough time finding it.

This remains Gonzaga’s tournament to lose.

The Houston Rockets (+310 ML) handed the Toronto Raptors their league-worst ninth straight loss with a 117-99 blowout win on Monday night.

Houston, which had lost 20 in a row heading into that contest, was an 8.5-point underdog at home.

At 17-26, the Raptors now have the 7th-worst record in the NBA and they've lost games to 4 of the 6 teams below them in the standings (Cleveland, Houston, Detroit x2, Minnesota).

Now four games back of the Boston Celtics for the eighth spot in the Eastern Conference, any talk about a potential playoff push is done for now.