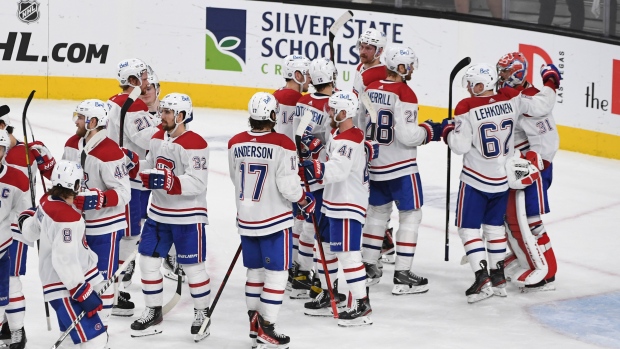 The Montreal Canadiens were completely overlooked as a massive underdog for their Stanley Cup semifinal series against the Vegas Golden Knights.

For at least one night, the Habs proved that they belong.

The Canadiens (+215) beat the Golden Knights 3-2 in Game 2 at T-Mobile Arena on Wednesday night to even their best-of-seven at 1-1.

Montreal, which was +700 to win the series before last night’s game, has made it a best-of-five heading back home for Games 3 and 4.

Joel Armia, Tyler Toffoli and Paul Byron scored for the Habs as they earned a split in Vegas.

Carey Price made 29 saves as he set a new career high for most wins in a single postseason with nine.

Montreal improved to 9-1 in these playoffs when they score first. They are 0-3 when they give up the first goal.

As mentioned, the Habs were +700 to win the best-of-seven heading into Game 2. Now the series shifts to the Bell Centre, with the Habs at +270 to win the series.

Extending his points streak to 8 games via the 2-0 goal on Wednesday, Tyler Toffoli leads the @CanadiensMTL 2021 playoff run with an almost point-per-game pace (12 in 13 GP). It's a total that's 6th on this list among those in their 1st season as a member of the Habs organization pic.twitter.com/BDMSMIGG8C

The Canadiens were +1800 to win the Stanley Cup before last night’s win.

Montreal still has the longest odds of the four remaining teams. However, the Habs are now +900 to win the Cup.

The Atlanta Hawks rallied from down 26 points to beat the Philadelphia 76ers 109-106 in Game 5 to take a 3-2 series lead on Wednesday night.

The 26-point comeback is tied for the third largest in a playoff game over the past 25 postseasons.

Trae Young scored a game-high 39 points as the Hawks outscored Philadelphia 40-19 in the fourth quarter.

Joel Embiid and Seth Curry were the only two 76ers players who scored a field goal in the second half.

Now the series moves to Atlanta for Game 6 on Friday night with the Hawks at -165 to advance.

Paul George of the @LAClippers had 35+ points, 15+ rebounds and 5+ assists in a playoff game for the second time in his career (2017 vs. Cleveland).

The only other active players with multiple such games: LeBron James (7) and Kevin Durant (3).

The Clippers went from +120 to +310 money line for Game 5 following the news that Kawhi Leonard would be out indefinitely.

After George led L.A. to the upset on the road, the series is headed back to Staples Center with the Clippers as a -190 favourite to win the series.

U.S. Open Set To Get Underway On TSN

The Golf Talk Canada team weighed in with their picks earlier in the week.

The PGA Tour heads to Torrey Pines for the third major of the year this week. With an absolutely loaded field, who is primed to contend for the outright win? @ZeeManGolf, @BobWeeksTSN, and @adam_scully reveal their picks to win the 2021 U.S. Open. https://t.co/xLtd4tJVn2 #USOpen pic.twitter.com/LjpqjxKu1b

TSN Edge will have complete coverage throughout the tournament, with our very own Adam Scully setting the stage heading into each round.

He took a look at the first round leader market.

The Azzurri are the first team to advance to the knockout stage at Euro 2020.

Flawless Italy flexing its muscle and looking like a #EURO2020 favourite.

In the process, Roberto Mancini’s squad became the first team in Euro history to win consecutive games by a shutout of three goals or more.

Now they will have the opportunity to clinch top spot in Group A with a win or draw against Wales on Sunday.

Italy has won 10 straight overall without conceding a single goal and is undefeated in its past 29 games overall (24-0-5).

Aaron Ramsey and Connor Roberts scored for Wales (+155) in a 2-0 win over Turkey to remain within reach of Italy for top spot in Group A.

We are just hours away from the start of the U.S. Open on the @TSN_Sports network. @adam_scully offers up some names to consider in the 1st round leader market. https://t.co/IQYYSPF8Lk #USOpen pic.twitter.com/TWiNYuJ8w5

Jacob deGrom struck out eight of the nine batters he faced over three perfect innings before leaving the New York Mets’ (-310) 6-3 win over the Chicago Cubs with shoulder soreness on Wednesday night.

It’s the fourth time this season that deGrom has either left a game or been scratched from a start due to an injury.

With Jacob deGrom coming out of the game, a summary of his perfect, but short night:
- 3 perfect innings pitched (8 strikeouts)
- Struck out final 7 batters he faced
- 1-1, RBI single as hitter (only at-bat)
deGrom's ERA for the season is now 0.54 pic.twitter.com/82uIzLxU3P

Before his exit, deGrom lowered his ERA to 0.54, which is the lowest ERA in the first 11 starts of a season since earned runs became an official stat.

Hopefully, deGrom will manage to avoid the injured list.

After a record start to the season, deGrom emerged as the National League MVP favourite at +175 odds.

It would be an absolute shame if he was forced to miss an extended amount of time.