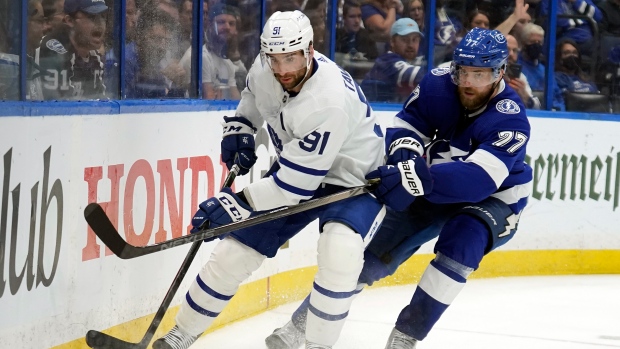 Four teams had an opportunity to punch their tickets to the second round of the Stanley Cup Playoffs last night.

Only one of them was able to take care of business.

The St. Louis Blues beat the Minnesota Wild 5-1 to win their best-of-seven series 4-2.

St. Louis is the first series underdog to advance to the second round in this year’s playoffs.

All three of those teams now have an opportunity to advance to the second round of the Stanley Cup Playoffs with a trio of Game 7s scheduled for Saturday night.

The Toronto Maple Leafs were nine minutes and 20 seconds away from advancing to the second round for the first time in 18 years when Nikita Kucherov beat Jack Campbell with a power play goal to tie Game 6 at 3-3.

Brayden Point scored the winner with less than two minutes left in the first overtime period, giving Tampa Bay the 4-3 lead and forcing a Game 7 on Saturday night.

Brayden Point scored the winner in overtime as the Lightning (-142 ML) beat the Maple Leafs 4-3 to force a Game 7.

Point to score and Tampa Bay to win was +285 at @FanDuelCanada. pic.twitter.com/zZYWDKgT92

After rallying from down 2-0 to take a 3-2 lead, the Maple Leafs looked like they were in complete control throughout the first half of the third period.

Then David Kampf and Alex Kerfoot took back-to-back high sticking penalties to set up a 5-on-3 for the Lightning, Kucherov tied it, and it set up a next goal wins scenario in which Toronto ended up on the losing side.

Kucherov to score and Tampa Bay to win was +255 at FanDuel Sportsbook.

Point to score and the Lightning to win was +285.

Heart rates back to normal, folks??

We'll see you on Saturday for Game 7. ⚡️

Tampa Bay improved to 17-0 straight up following a loss in the Stanley Cup Playoffs dating back to 2019-20.

If you bet on the Lightning to win the series at +275 entering last night, you can now guarantee a small profit if you choose to hedge with the Maple Leafs to win Game 7.

Toronto is currently -120 on the money line for Saturday’s finale at FanDuel Sportsbook.

The Lightning are now +100 to win and advance.

In terms of a historical trend to lean on for Game 7, it depends on how you decide to look at it.

On the flip side, the Maple Leafs have now lost nine straight potential series-clinching games.

Both teams are among the top-six choices to win the Stanley Cup.

It only makes sense that they go the distance in a heavyweight fight that could very well determine which team represents the Eastern Conference on the game’s biggest stage.

It’s going to be a tense 36 hours for hockey fans in Toronto as the countdown to Saturday’s finale.

Fans of the Edmonton Oilers dealt with some tense moments last night with their season on the line in Game 6 against the Los Angeles Kings.

"There will be a Game 7."#LetsGoOilers pic.twitter.com/DgKZGsEl3u

After Connor McDavid and Evander Kane gave Edmonton a 2-0 lead, the Kings battled back to tie it at 2-2 less than a minute into the third period.

It was McDavid to the rescue late though, as he helped set up a goal by Tyson Barrie at 14:50 of the third, then teed up Kane with a minute left in regulation to seal the 4-2 win.

From @CraigJButton: How Connor McDavid “walked the walk” with the Oilers facing elimination - https://t.co/FkxcKF2tjg#TSNHockey | #StanleyCup pic.twitter.com/bxdyvxFbxL

Headed back to Alberta with home ice advantage, the Oilers are a -220 money line favourite for Game 7 at FanDuel Sportsbook.

Brad Marchand made sure the Boston Bruins would get to Game 7 with a goal and an assist in a 5-2 win over the Carolina Hurricanes last night.

Brad Marchand opened the scoring for the @NHLBruins, who own an all-time record of 34-26-1 when scoring first in games when facing elimination. #StanleyCup #NHLStats: https://t.co/pdKmyQX3rs pic.twitter.com/niuWyDa8EJ

Marchand to score and Boston to win was +300 at FanDuel Sportsbook.

The home team has won all six games in the series.

Based on that trend, it makes sense that Carolina is currently a -134 favourite for Game 7 on home ice.

The Miami Heat are headed to the Eastern Conference Finals following a 99-90 win over the Philadelphia 76ers last night to win their series 4-2.

Jimmy Butler led the way with 32 points, eight rebounds and four assists in the win.

Butler joins Dwyane Wade, who did so in 2005. pic.twitter.com/gYQJbQONrY

He scored 32+ points in all three games in Philadelphia in the series.

Butler to score 30+ was +240 at FanDuel Sportsbook last night.

Miami is down to +380 to win the NBA championship at FanDuel Sportsbook this morning.

They can find out who they’ll play in the Eastern Conference Finals as early as tonight when the Milwaukee Bucks look to finish off their series against the Boston Celtics as a small favourite for Game 6.

Luka Doncic is tied for the third-fastest (in terms of games played) in NBA history to reach 700 playoff points. He trails only Wilt Chamberlain & Michael Jordan. pic.twitter.com/FM2WCDr0pD

Doncic has averaged 31.1 points, 10.1 rebounds and 6.9 assists per game this postseason.

He’s averaged a ridiculous 39.0 points per game when facing elimination.

Even after suffering a 27-point loss, Phoenix opened as a six-point favourite for Game 7 at FanDuel Sportsbook.

Wednesday and Thursday night in the NHL for favourites: 7-0

Wednesday and Thursday night in the NBA for favourites: 0-4 pic.twitter.com/FOXnuNi1cA

The home team has won all six games in the series by a combined margin of 103 points.

Either that trend continues and the Suns punch their ticket to the Western Conference Finals, or Doncic leads the Mavericks to the biggest upset of the NBA playoffs so far with a win in Game 7 on Sunday night.