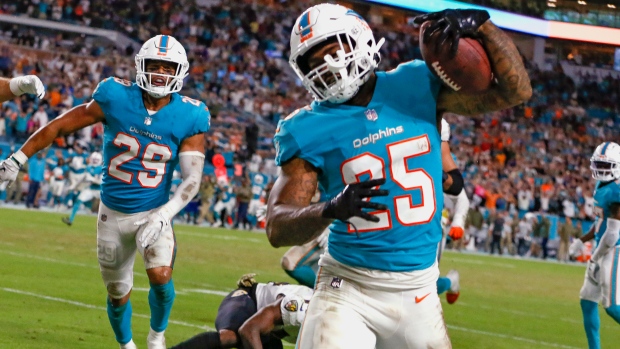 Remember earlier in the year when the betting public beat the books in the NFL three weeks in a row?

Well, the books are out for revenge, and it isn’t pretty.

If you thought it was safe to bet an NFL favourite again on the heels of a chaotic Week 9, think again.

Miami closed as an 8.5-point underdog, making it the fourth-biggest upset of the season to date.

Each of the five biggest upsets so far this season happened in the past 15 days.

If you bet the Ravens against the spread, on a teaser, or to win straight up on a parlay, last night’s game was tough to watch.\

Meanwhile, if you like to bet player props or play fantasy football, it wasn’t much better.

If you thought they were in line for another big game in a return to their home state of Florida, the numbers supported that idea.

Jackson targeted him a combined 26 times over their previous two games.

The targets were there again on Thursday night. The production was not.

Brown finished with six receptions for 37 yards on 11 targets.

That’s on the heels of averaging 7.0 receptions for 98.0 receiving yards on 13.0 targets in Baltimore’s previous two games.

Jackson went 26-of-43 for 238 yards with a touchdown and an interception. He was held to 39 rushing yards on nine attempts.

Lamar Jackson faced the most defensive back blitzes (24) of any QB since 2015 during a game in which the Ravens were held to their fewest points in a regular-season game under Jackson (10).

If you played them in fantasy or bet the over on their player props, then it was a rough start to Week 10.

On the flip side, it was the Dolphins’ receivers who put up the type of numbers that we expected from the Baltimore offence.

Jaylen Waddle going to be top 10 next year.

If you played the over on their player props or started any of those receivers in fantasy, you had to be thrilled with that type of production.

The same cannot be said if you rolled the dice on Miami’s tight end.

Three throws down in the RZ and none go to Gesicki @MiamiDolphins ?!?!

The Dolphins’ defence to score the first touchdown of the game was 40-to-1. Miami to win both halves was 10-to-1.

Tua Tagovailoa didn’t start for the Dolphins, but he replaced an injured Jacoby Brissett in the second half and went 8-of-13 for 158 yards with a rushing touchdown.

Tagovailoa to score the final touchdown of the game was 33-to-1 – not that you would bet it considering he didn’t start due to an injury of his own.

Tua Tagovailoa and the Dolphins (+315 ML) beat the Ravens 22-10 on Thursday Night Football. Miami closed at +8.5, making it the fourth-biggest upset of the season to date. The five biggest upsets have all come in Week 8 or later. #FinsUp pic.twitter.com/RFmUfazYXi

NFL underdogs are now 21-7-1 against the spread dating back to the start of Week 8, including 16-13 straight up.

With the five biggest upsets of the season all coming over the past 15 days, NFL bettors will certainly be wary wondering what’s next heading into the weekend.

There were a couple of notable signings in the NFL before Thursday Night Football kicked off.

Neither of them had a major impact in futures markets.

Since hiring Sean McVay, the Rams...

Not everything worked, but they go for it. No stopping.

The Rams were +1500 to be OBJ’s next team when the betting odds were first posted following his release from the Cleveland Browns.

Keep in mind that Los Angeles already has the betting favourite to win AP Offensive Player of the Year in Cooper Kupp (+145).

They also have Robert Woods and Van Jefferson.

Welcome to LA Odell Beckham Jr.! Hopefully OBJ and Von Miller can help lead the Rams to a Super Bowl!

From a fantasy perspective, there’s at least some optimism that he could become a little more relevant in Los Angeles than he was in Cleveland.

Meanwhile, Cam Newton returned to the franchise that drafted him first overall in 2011 as he signed with the Carolina Panthers.

"A healthy Cam Newton is a special player.”https://t.co/rFRImGLXqW

Carolina is 4-5 entering a Week 10 clash with the Arizona Cardinals.

Raptors win another on the road

The win and cover as a four-point underdog snapped a three-game slide both straight up and against the spread.

Fred VanVleet and the @Raptors hold on for the road win in Philadelphia!

The Hamilton Tiger-Cats and Toronto Argonauts will kick off Week 15 in the CFL tonight with an East Division showdown.

just trying to save the planet 😉 pic.twitter.com/aYLnDV8tpL

That game opened as a pick’em and has remained that way all week, with the total set at 44.5.

The Argonauts can clinch first place in the East Division and home-field advantage for the East Final with a win tonight.

Meanwhile, the Tiger-Cats will clinch first place in the East if they win out, beginning in Toronto tonight.

Elsewhere, the line for Saturday’s game between the Winnipeg Blue Bombers and Montreal Alouettes continues to fall after it was confirmed that Zach Collaros would not start.

Winnipeg opened as an 8.5-point favourite, but that number is down to 6.5 as of this morning.