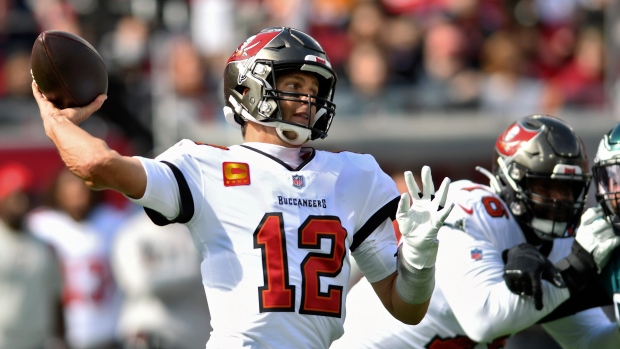 Tailing sports betting trends blindly can be a dangerous game.

The NFL’s super wild-card round provided a perfect example of that.

For the casual fan looking for a notable trend to back, the fact that home favourites went a combined 3-15 against the spread in the wild-card round over the previous four seasons combined might have caught their attention.

This time around home favourites went a combined 5-1 straight up and against the spread, with four of those five wins by a margin of 16 points or more.

You can’t repeat the past.

If you decided to put your money on the underdogs over the weekend based on that recent trend, you certainly learned a lesson.

While you never want to blindly tail a betting trend, every so often we stumble on information that jumps off the page – a number or nugget that forces us to pay attention to gain a little perspective into the situation some teams find themselves in heading into any given game.

That was the situation I found myself in with a number I stumbled upon while looking at the NFL divisional round matchups. I felt compelled to explore a little further.

One NFL divisional round trend to consider

The Tampa Bay Buccaneers are the 11th defending Super Bowl champion to play in the wild-card round the next season.

None of the previous 10 advanced past the divisional round.

That means the teams that have found themselves in the situation the Buccaneers are in this weekend went a combined 0-10 reaching the conference championship game.

In 2005, the Patriots were back in the playoffs looking for their fourth Super Bowl ring in five years.

New England beat the Jacksonville Jaguars 28-3 in the wild-card round. Then in the divisional round, the Patriots lost to Jake Plummer and the Denver Broncos 27-13.

In 2019, Brady and the Pats were coming off their second Super Bowl win in three years.

New England lost to the Tennessee Titans 20-13 in the wild-card round. That was Brady’s final game with the Patriots.

This time around, Brady and the Buccaneers cruised to a 31-15 win over the Philadelphia Eagles in the wild-card round.

Now they will host Matthew Stafford and the Los Angeles Rams in the Divisional Round.

I’m not going to make a case for the Rams to win on Sunday based solely on the fact that each of the previous 10 defending Super Bowl champions that played in the wild-card round didn’t make it back to the conference championship.

However, the fact that these teams went a combined 0-for-10 does make me wonder whether Tampa Bay can avoid that fate.

It isn’t the only trend I’ve considered for this game, either.

Los Angeles went 2-0 straight up as an underdog this season. While that number might not actually stand out all that much on its own, one of those wins certainly does, based on their opponent.

Cooper Kupp finished that game with nine catches for 96 yards and two touchdowns.

L.A. went 10-for-15 on third down, scoring four touchdowns and two field goals on 10 drives, and leading 34-17 before the Buccaneers cut into that deficit with a garbage-time touchdown with 1:10 left in the fourth quarter.

Meanwhile, despite giving up 432 yards through the air, the Rams defence sacked Brady three times and held the Buccaneers to 24 points.

L.A. generated the third-highest pressure percentage without blitzing in the NFL this season, and if they can get to Brady early and often on Sunday it will have a major impact on the outcome.

Did I mention that Tampa Bay could be without right tackle Tristan Wirfs due to a sprained ankle?

Arians says Tristan Wirfs is in a boot right now, he and Ryan Jensen won't practice until Friday, but tough as he is, wouldn't rule out Wirfs playing Sunday in next round.

Did I also mention that Chris Godwin is injured, Antonio Brown is no longer on the roster, and Mike Evans will have to deal with Jalen Ramsey?

The Rams will do everything they can to generate pressure on Brady, while concentrating their coverage in an effort to keep the ball away from Evans and Rob Gronkowski as much as possible.

Jalen Ramsey was targeted only 3 times as the nearest defender in tonight's win, allowing 2 receptions for 14 yards in coverage.

Ramsey has allowed fewer than 25 yards in coverage in 3 of 4 games against Kyler Murray's Cardinals.#AZvsLAR | Powered by @awscloud pic.twitter.com/rANY5YruhY

The Buccaneers don’t really have a reliable option to stretch the field and throwing underneath will play to the strength of this L.A. defence.

On the other side of the football, Stafford will test the Tampa Bay secondary with Kupp, Odell Beckham Jr., Van Jefferson and Tyler Higbee.

Running back Cam Akers really stood out on the tape from their wild-card round win over the Arizona Cardinals and gives them another weapon in rotation with Sony Michel.

Brady has won nine straight divisional round starts, which is the longest streak by any quarterback in a single round in playoff history.

That’s another number that jumps off the page.

Tom Brady is 14-2 in the divisional round

However, unlike the trend I highlighted for so many past defending Super Bowl champions that have failed in this circumstance, Brady’s run seems less likely to continue since it comes down to the same individual winning over and over again.

Here’s one final note to consider for the divisional round: All four spreads for this weekend’s games are set at six points or less.

Per ESPN Stats & Info, it’s the first time that all four divisional round spreads were six or less since 1971.

Those numbers suggest that the matchups this season are closer on paper this season than in any other season over the past 50 years.

Remember, this is the second season under the new playoff format, which means no first-round bye for the No. 2 seeds.

It also means that there is potential value to gain teasing the underdogs through key numbers.

"Y'all the best in the world! Keep that up!"@YouTubeTV Mic'd Up: @Ty_Higs19 brings the energy in our Wild Card win. 🎤 pic.twitter.com/U1qGx47nr9

I think that L.A. and the Buffalo Bills have legitimate upset potential this weekend, so I’m willing to pair them in a teaser as an official recommendation.

In this circumstance, I’m not buying blindly based on a trend.

However, I do think there is something to the circumstance that the Buccaneers find themselves in, and there’s added value teasing them and the Bills through key numbers, so I feel making that call is the right move.