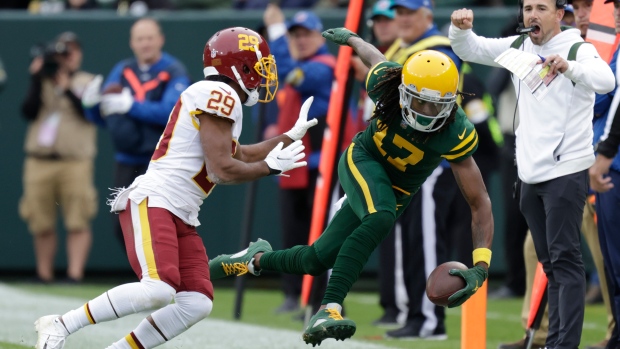 At first glance, it looked like Thursday Night Football would give us the marquee matchup for Week 8 in the NFL.

Now just over 24 hours away from kickoff, there is plenty of uncertainty surrounding a showdown that could turn out to be more lopsided than anticipated.

The Arizona Cardinals opened as a 3.5-point favourite for Thursday night’s game against the Green Bay Packers.

That number climbed to 6.5 after Green Bay’s all-pro wide receiver Davante Adams was placed on the reserve/COVID-19 list.

Then on Tuesday, the Packers placed Allen Lazard on the reserve/COVID-19 list. Meanwhile, Marquez Valdes-Scantling has been running but remains on the IR.

Add it all up and there is a very real chance that Green Bay could be without its top three wide receivers when they visit Arizona.

The Packers have gone undefeated since a lopsided Week 1 loss to the New Orleans Saints, but absences on both sides of the football could have bettors lining up to bet the Cardinals to beat them on Thursday.

Packers’ absences adding up ahead of TNF

The Cardinals are the league’s last remaining undefeated team at 7-0. They are 6-1 against the spread.

Entering Week 8, Arizona has covered games by an average of 11.9 points per game, which is the best mark in the NFL so far this season.

With both teams at full strength, I leaned towards the Cardinals to cover the 3.5 in what I projected to be a high-scoring affair.

That number has jumped to 6.5 with Adams, Lazard and MVS all potentially out.

First Davante Adams. Now Allen Lazard. If MVS doesn't come off IR, the Packers could be headed to Arizona without their top-three receivers.

If all three are confirmed out, that would leave Randall Cobb, Amari Rodgers and Equanimeous St. Brown as the remaining receivers on the Green Bay roster.

Each week, our NFL analyst Davis Sanchez gives us an Early Lean, in which he picks a side that he thinks is available at the best price bettors will get them at that particular week.

The undefeated Cardinals will host the one-loss Packers in one of the most highly anticipated games of Week 8 in the NFL on Thursday Night Football. @DavisSanchez has his Early Lean for that prime time showdown. https://t.co/Qdf7j9DJLD pic.twitter.com/aeEDMrcqFB

This week, his Early Lean was an early play, as he went ahead and locked in the Cardinals -6 in anticipation of that number ballooning even more.

That is certainly a realistic expectation at this point.

With the absences on offence, and some key injuries for a defence that hasn’t been very good at all this season, it makes sense to jump on both the side as well as props before those numbers climb.

In addition to taking the Cardinals, I like the Arizona team total over 28.5, James Conner to go over 46.5 rushing yards and Rondale Moore to go over 30.5 receiving yards.

Again, there is still a chance that both Adams and Valdes-Scantling will play for the Packers.

At the same time, there is a chance that both will not play, and I liked those prop numbers even before the injury news, so I’ll lock them in now.

The total stayed under 8.5.

Jorge Soler hit a home run on the third pitch of the game and the Braves became the first team in MLB history to score runs in each of the first three innings of Game 1 of a World Series.

Just like that, the complexion of the series completely changed.

The Astros will need a response tonight to avoid falling into a 0-2 hole at home.

Despite the urgency for Houston, tonight’s game is currently a pick’em with Jose Urquidy set to get the nod opposite Max Fried for the Braves.

The Astros have lost each of their last five World Series home games, and they will be in tough versus Fried, who has been solid for the most part this postseason.

Nikolaj Ehlers and Paul Stastny scored 19 seconds apart as the Winnipeg Jets (-145) rallied late to stun the Anaheim Ducks 4-3 for their third win in a row.

After coming up huge late in the game with a pair of goals 19 seconds apart, @jamiemclennan29 praises Nikolaj Ehlers for taking control of the game late to steal the win for the Jets on Tuesday: https://t.co/VbRmbPhvA9#TSNHockey pic.twitter.com/jf3gBBrG1z

Matt Dumba scored the winner as the Minnesota Wild (-120) beat the Vancouver Canucks 3-2 to spoil their home opener.

The Canadiens fell to 1-6-0 this season – the worst record in the NHL.