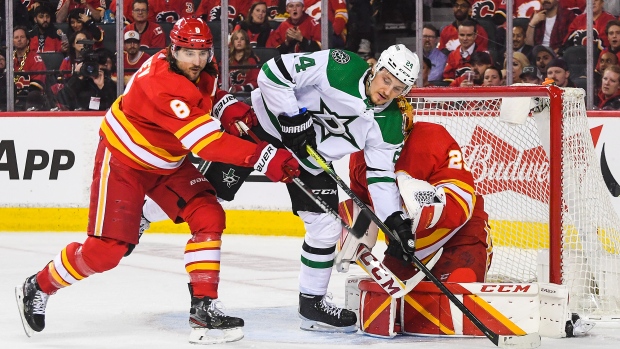 None of those underdogs won or covered the puck line.

The Calgary Flames, Florida Panthers and New York Rangers each rallied for two-goal victories in their respective Game 5’s.

Stanley Cup playoff favourites went 3-0 straight up and on the puck line.

The Flames and Stars continued to keep the splits towards the over from really taking off as the overs went 2-1.

That series between Calgary and Dallas is responsible for 31 per cent of the total unders so far this postseason, with four of the first five games staying under the total.

By favourite, I mean the most profitable trend that the team at TSN EDGE has tracked throughout the playoffs.

The Rangers rallied from down 2-0 in the second period to beat the Penguins 5-3 and keep their season alive.

New York delivered for anybody that bet them at -130 on the money line and +180 on the puck line at FanDuel Sportsbook.

All five games in that series have gone over the total.

Filip Chytil scored a power play goal early in the third, then Ryan Lindgren scored an empty net goal in the final minute to push the third period total over.

More on that in one minute.

The Florida Panthers rallied from down 3-0 early in the second period to beat the Washington Capitals 5-3 and take a 3-2 series lead.

The Panthers cashed as a -225 money line favourite and covered the puck line at +105 at FanDuel Sportsbook.

Carter Verhaeghe factored on all three @FlaPanthers goals in the middle frame, matching the franchise record for most points in a single #StanleyCup Playoffs period.#NHLStats: https://t.co/tWOMhQ7IQY pic.twitter.com/9m4S1WBtZu

It was also the second consecutive game that Carter Verhaeghe led the comeback with a pair of goals.

Verhaeghe, who went off for five points in the win, leads the entire NHL with 10 points this postseason.

More importantly for me, he scored early in the final frame and then set up a late goal by Claude Giroux to push the third period total over 1.5 goals.

Finally, Mikael Backlund, Andrew Mangiapane and Trevor Lewis all scored as Calgary rallied from down 1-0 in the third period to beat the Stars 3-1.

From @MarkRoeTv, @cherylpounder & @jamiemclennan29: How the #Flames stuck to the game plan and used a big third period to down the Stars - https://t.co/Fsmmo10ttx#TSNHockey | #StanleyCup pic.twitter.com/P8lpvwJOAx

Flames' money line cashed at -230, and they covered the puck line at +115 at FanDuel Sportsbook.

Three goals in the final frame also meant a clean sweep for the third-period overs.

After a 3-0 sweep last night, third-period overs are now 22-1 over the past 23 Stanley Cup Playoffs games.

As far as I’m concerned, a trend with a 95.65 per cent success rate over a 23-game span is a betting trend that you need to read about.

We’ll see if it continues tonight with four crucial games on the schedule tonight in the NHL.

If you’re a Toronto Maple Leafs’ fan, buckle up.

You’ve waited a full year for this moment.

Now Toronto gets two chances to close out the Tampa Bay Lightning and advance to the second round for the first time in 18 years.

Can the Maple Leafs take care of business tonight on the road in Tampa Bay?

As somebody who bet the “No” option on Toronto to make it out of the first round at FanDuel Sportsbook, I need to see it to believe it.

"We haven't let this series slip away. We let a game slip away."#TBLvsTOR

The Maple Leafs are -350 to win the series at FanDuel.

Meanwhile, the Carolina Hurricanes, St. Louis Blues and Los Angeles Kings all have the opportunity to book their tickets to the second round with a win tonight.

Anybody that reads this column knows that I’ll be hunting for more third-period overs tonight.

I’ve also already locked in my first prop bet for tonight, taking David Pastrnak to record over 4.5 shots on goal at +102 at FanDuel Sportsbook.

With the Bruins facing elimination at home, I’ll throw a unit on Pastrnak’s SOG prop one more time and hope that he doesn’t let me down tonight.

Anybody who fully committed to watching Game 5 between the Milwaukee Bucks and Boston Celtics from start to finish last night was in for a treat.

Milwaukee trailed by as many as 14!

The Bucks and Celtics went down to the wire, with the defending champions pulling out the victory late, winning 110-107 as a +168 money line underdog at FanDuel Sportsbook.

Giannis Antetokounmpo led the way with his sixth career playoff game with 40 points and 10 rebounds.

Giannis just pulled of a Lebron James type of performance in the Garden. Carry the hell on…

If you still think the Celtics can win the series, you can bet them at +220 to advance at FanDuel Sportsbook.

Elsewhere, the Memphis Grizzlies avoided elimination with a 134-95 win over the Golden State Warriors.

top of the morning 〽️

Shout out to anybody that had Memphis winning by 39 points without Ja Morant.

It was the third-largest margin of victory for a team facing elimination in NBA postseason history.

Last night, the Grizzlies won by 39 points without Ja Morant playing, tied for the largest win by a team when their All-Star from that season does not play in NBA postseason history.

Memphis is now 21-6 when Morant does not play this season. pic.twitter.com/cErqO6uIgv

The Grizzlies cashed as a +146 money line underdog.

Memphis is now +700 to win the series down 3-2 heading to California for Game 6.

Golden State remains the favourite to win the NBA title at +220.

Looking at tonight’s NBA action, all eyes will be on the Philadelphia 76ers and Dallas Mavericks to see if they can avoid elimination.

The home team is 10-0 straight up and against the spread in those two series so far.
The 76ers are a 2.5-point home favourite for tonight’s elimination game.

The Mavericks are a two-point underdog and are currently +110 to win outright.